Congressman Joe Pitts
|
Posted: Nov 07, 2016 3:51 PM
Share   Tweet
The opinions expressed by columnists are their own and do not necessarily represent the views of Townhall.com. 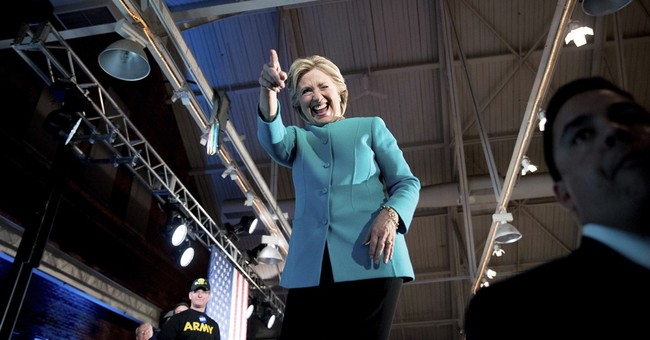 In 2014, Hillary Clinton approached the Moroccan government about hosting the “Clinton Global Initiative Middle East & Africa” meeting in Morocco. The king agreed and donated a large amount to the Foundation and the meeting. Ms. Clinton’s aide wrote in a private email, “This was [Hillary’s] idea, our office approached the Moroccans and they 100 percent believe they are doing this at her request. The King has personally committed approx $12 million both for the [Foundation’s] endowment and to support the meeting.”

But what was the trade off?

King Mohammed did not make the meeting donation in his own name. Although he could have made the massive gift directly from the Moroccan government, or even from his own personal account, he chose to direct it through a state-owned-enterprise called the OCP.

The OCP is an extension of the Moroccan government and operates in nearby Western Sahara. It mines phosphates in the region, which its parent, the Moroccan government, has occupied since 1975. OCP is a symbol of everything that is wrong with the relationship between Western Sahara and its occupier. The desert region is so valuable to Morocco because of its natural resources, and it uses the OCP as its tool to exploit them. The outfit pushes the narrative that the mining benefits the region, but locals indicate this is not the case. Former Sahrawi miners recall the company forcing them to retire early, slashing their pensions, and then hiring ethnic Moroccans for more senior positions.

Leaked diplomatic cables demonstrate Hillary Clinton’s long held support for Morocco; her Foundation’s relationship with the country has also proved to be lucrative over the years. King Mohammed was listed as having donated $500,000 to help build Bill Clinton’s presidential library, while OCP has donated as much as $6 million over the years to the Clinton Foundation.

Morocco has a long history of abusing human rights in Western Sahara, suppressing freedom of association and obstructing the region from voting on its independence. The U.S. State Department wrote in its 2015 Human Rights Report that concerns about Western Sahara were “the same as those in internationally recognized territories of Morocco: citizens’ lack of the ability to change the constitutional provisions establishing the monarchical form of government, security forces’ reported torture and ill-treatment of persons and imprisoned; the use of arbitrary and prolonged detention to quell dissent, corruption in all branches of government, harassment of journalists and human rights activists focusing on issues sensitive to the Moroccan government; and widespread disregard for the rule of law by security forces.”

One Sahrawi who formerly mined for OCP lamented, “Now we are concerned that if Hillary Clinton wins the presidency of the United States of America, she will take the side of Moroccans even more.”

In anticipation of announcing her presidential candidacy, Ms. Clinton declined to participate in the Clinton Foundation meeting in Morocco. However, in light of her tenure as Secretary of State and as her possible tenure as President of the United States, one cannot help but denote her actions with other countries as a predictor of foreign policy.

America’s official policy is that Morocco does not have sovereignty over Western Sahara, and that the two regions should reach a “mutually agreed solution to the conflict.” That is why our free trade agreement with the Kingdom does not currently apply to Western Sahara and why our bilateral foreign assistance in Western Sahara is not programmed through the Moroccan government.

This breech comes against the backdrop of recent international outcries over Morocco’s continued occupation of Western Sahara. The Secretary General of the UN recently explicitly labeled the country’s presence there as such, and a significant amount of OCP’s stakeholders have divested themselves of the company because of the Western Sahara operations. Recently, the European Union also published a legal opinion stating that its trade and association agreements with Morocco do not also apply to Western Sahara, because of the region’s standalone status.

Ms. Clinton’s moves are opposed to the pressure the entire international community is leveraging on this hotly contested issue.

The significance of her transaction with OCP lies not only in its quid pro quo nature, but in its outcome: its acceptance implicitly asserts Moroccan sovereignty over Western Sahara. The donation was a potential bribe. The Moroccans are seeking to buy future U.S. foreign policy. Every U.S. policymaker must be vigilantly aware of this sort of unseemly dynamic, or even the appearance of such a dynamic, when dealing with foreign governments.

U.S. policy should be guided not by foreign governments’ coffers, but instead by their commitment to our democracy’s longest abiding principles when it comes to human rights: freedom and self-determination for the world’s peoples.