Never Forget What Democrats Do With Power

Colin Hanna
|
Posted: Nov 06, 2018 12:01 AM
Share   Tweet
The opinions expressed by columnists are their own and do not necessarily represent the views of Townhall.com. 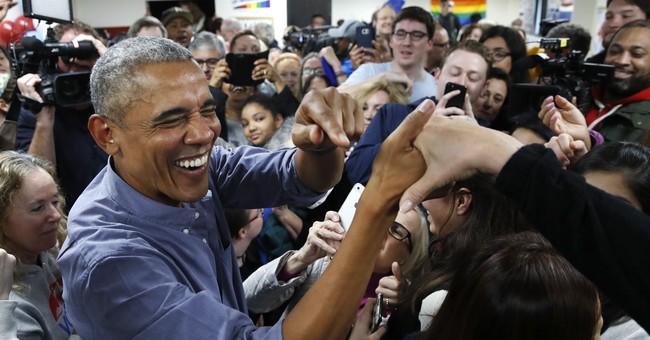 Americans should remember what’s at stake in the midterms. We should keep in mind the remarkable achievements of President Trump’s first two years in office: bold foreign policy initiatives, the impressive federal judges and the robust economy. But we should also contrast how the government operates now compared to the corrupt methods of the previous administration.

Although the press, along with President Obama, like to claim his was a “scandal-free” administration, the facts tell a different story. The Obama administration had no compunction when it came to bullying and intimidating their opponents. The best-known example is when the IRS targeted conservative organizations, according to the Treasury Inspector General for Tax Administration, by “using inappropriate criteria to identify organizations applying for tax-exempt status to review for indications of significant campaign intervention.”

In short, the IRS used bureaucratic red tape to block conservatives from organizing against Democrats. When these groups applied for tax exemption, “no work was completed on the majority of these applications for 13 months.” This is nothing short of an affront to every American’s right to political assembly. .

The Obama administration also applied pressure to disfavored groups through a program called Operation Choke Point. This program was supposed to fight fraud, but Democrats distorted it into a series of backdoor regulations to eliminate legal businesses they considered dangerous or undesirable. They didn’t like guns, but instead of working with Congress to pass legislation, the administration pressured banks to stop doing business with gun manufacturers. When Congress wouldn’t fulfill the administration’s desire to put payday lenders out of business, the Obama administration made it very difficult and expensive for banks to do business with them.

The extent of Operation Choke Point came into clearer focus last month with the release of court documents that showed just how active top government officials were in the program. The documents show that the leadership at the Federal Deposit Insurance Corporation (FDIC) made clear to the agency’s regional directors: “if a bank was found to be involved in payday lending, someone was going to be fired.” The message was received, loud and clear: one regional director told his staff to inform him of “any banks even remotely involved in payday” lending.

Lest you believe it was only Democrats at the federal level who acted this way, remember Wisconsin’s infamous John Doe Case, in which a state agency sought to criminalize the speech of its political adversaries—in particular, Governor Scott Walker, who posed a serious threat to progressives in the state. This effort led to armed police officers conducting pre-dawn raids of homes to collect computers and files of conservative activists. As David French of National Review put it, “This was a witch hunt, designed to persecute American citizens for exercising their First Amendment right to free speech.”

By the way, Democrats in power don’t only use corrupt means to silence their opponents—they also use questionable methods to help their friends. That’s what the Environmental Protection Agency did under President Obama, encouraging environmental organizations to sue them so they could settle for large sums of government money that would fuel these progressive non-profits.

Today, thankfully, the Democrats are not in power—and these examples remind us of why they deserved to lose it in the first place, and why it’s important Republicans maintain control of Congress in 2018 and the presidency in 2020. Otherwise, we can expect not only more shouting in congressional hearings, but more backdoor deals, more silencing of political opponents, more political spoils for progressive causes.

What Senator Lindsey Graham said of his colleagues on the Judiciary Committee applies to all Democrats: “…y’all want power. God, I hope you never get it.”