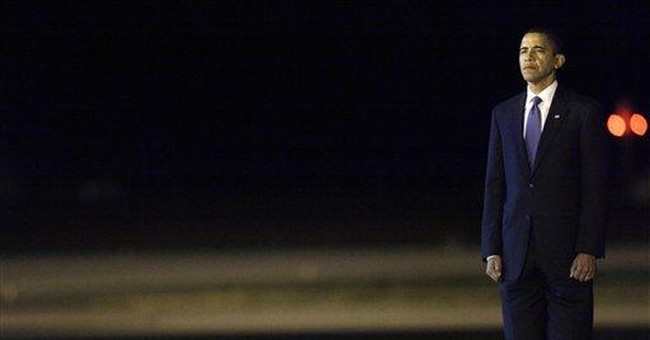 "Niki, I'm dying. Don't have much to leave you. Just three envelopes. Open them, one at a time, when you get into big trouble."

In the Barack Obama version, there are 50 or so such blame-Bush free passes before the gig is up. By my calculation, Obama has already burned through a good 49. Is there anything he hasn't blamed George W. Bush for? The economy, global warming, the credit crisis, Middle East stalemate, the deficit, anti-Americanism abroad -- everything but swine flu.

It's as if Obama's presidency hasn't really started. He's still taking inventory of the Bush years. Just this Monday, he referred to "long years of drift" in Afghanistan in order to, I suppose, explain away his own, well, yearlong drift on Afghanistan.

This compulsion to attack his predecessor is as stale as it is unseemly. Obama was elected a year ago. He became commander in chief two months later. He then solemnly announced his own "comprehensive new strategy" for Afghanistan seven months ago. And it was not an off-the-cuff decision. "My administration has heard from our military commanders, as well as our diplomats," the president assured us. "We've consulted with the Afghan and Pakistani governments, with our partners and our NATO allies, and with other donors and international organizations" and "with members of Congress. "

Obama is obviously unhappy with the path he himself chose in March. Fine. He has every right -- indeed duty -- to reconsider. But what Obama is reacting to is the failure of his own strategy.

There is nothing new here. The history of both the Afghanistan and Iraq wars is a considered readjustment of policies that have failed. In each war, quick initial low-casualty campaigns toppled enemy governments. In the subsequent occupation stage, two policy choices presented themselves: the light or heavy "footprint."

In both Iraq and Afghanistan, we initially chose the light footprint. For obvious reasons: less risk and fewer losses for our troops, while reducing the intrusiveness of the occupation and thus the chances of creating an anti-foreigner backlash that would fan an insurgency.

This was the considered judgment of our commanders at the time, most especially Centcom commander (2003-2007) Gen. John Abizaid. And Abizaid was no stranger to the territory. He speaks Arabic and is a scholar of the region. The overriding idea was that the light footprint would minimize local opposition.

It was a perfectly reasonable assumption, but it proved wrong. The strategy failed. Not just because the enemy proved highly resilient but because the allegiance of the population turned out to hinge far less on resentment of foreign intrusiveness (in fact the locals came to hate the insurgents -- al-Qaeda in Iraq, the Taliban in Afghanistan -- far more than us) than on physical insecurity, which made them side with the insurgents out of sheer fear.

What they needed, argued Gen. David Petraeus against much Pentagon brass opposition, was population protection, i.e., a heavy footprint.

In Iraq, the heavy footprint -- also known as the surge -- dramatically reversed the fortunes of war. In Afghanistan, where it took longer for the Taliban to regroup, the failure of the light footprint did not become evident until more recently when an uneasy stalemate began to deteriorate into steady Taliban advances.

That's where we are now in Afghanistan. The logic of a true counterinsurgency strategy there is that whatever resentment a troop surge might occasion pales in comparison with the continued demoralization of any potential anti-Taliban elements unless they receive serious and immediate protection from U.S.-NATO forces.

In other words, Obama is facing the same decision on Afghanistan that Bush faced in late 2006 in deciding to surge in Iraq.

In both places, the deterioration of the military situation was not the result of "drift," but of considered policies that seemed reasonable, cautious and culturally sensitive at the time, but ultimately turned out to be wrong.

Which is evidently what Obama now thinks of the policy choice he made on March 27.

He is to be commended for reconsidering. But it is time he acted like a president and decided. Afghanistan is his. He's used up his envelopes.