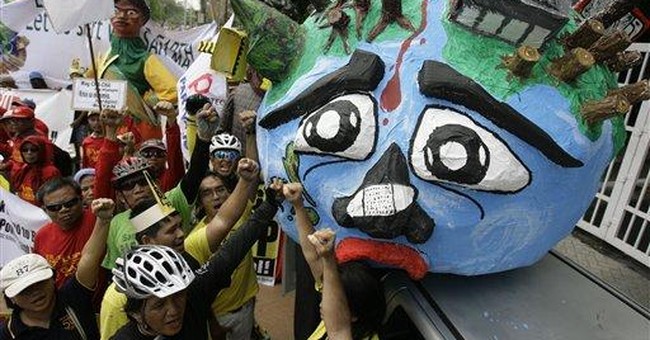 Few adults may know it, but kids across the country are about to celebrate a holiday: Earth Day, which is April 22. Schools will take a break from normal instruction to discuss the importance of preserving the environment. That may sound like a harmless activity, but too often Earth Day becomes a platform for pushing an ideological brand of environmentalism. Parents need to pay attention and ask their children's teachers what's their plans are for Earth Day.

Unlike most holidays, Earth Day expressly focuses on youth. No gifts will be exchanged and no Easter Bunny will deliver jelly beans in biodegradable packages (undoubtedly the process of refining all that sugar alone offends true Earth Day enthusiasts), but galvanizing young people to become involved in protecting the environment is the day's express purpose.

The first Earth Day was held in 1970. Senator Gaylord Nelson, Earth Day's founder, endeavored to bring national attention to the cause of improving the environment. He saw the success of anti-war activists in raising awareness about their cause through demonstration and “teach-ins.” He wanted to enlist the same spirit in the cause of the environment. Today, schools across the country—and even around the world—participate in Earth Day events.

This sounds like a smashing success. And not just for Senator Nelson and environmentalists, but for all of us who benefit from a healthy, clean environment. After all, we all want to protect the planet and have the next generation grow up appreciating nature and the importance of maintaining our natural habitat.

Yet Earth Day organizers too often go beyond promoting that simple message and use the occasion as a platform for advancing a political ideology. Global warming, for example, is a frequent topic on Earth Day. Schools tend to echo the message of global warming alarmists, claiming that man is causing temperatures to rise with potentially catastrophic consequences for our planet and mankind. Many schools even show Al Gore's movie An Inconvenient Truth. That film may have won an Academy Award, but it is widely recognized as propaganda, with a judge in the United Kingdom finding that it grossly exaggerates even the most dire predictions about global warming's potential harm.

Schools shouldn't be frightening our children with misleading information about environmental threats. Research shows that children already have a disproportionate fear of global warming. One study reported that: “Nearly 4 in 5 kids saw global warming as “a very serious problem,” 3 in 4 saw it as “a threat to all life on the planet” and about 2 in 3 felt global warming is “a threat to my future well-being and safety,” and “feel afraid of what might happen.”

Instead of adding to this alarmism, schools should provide students with some balance by presenting evidence from scientists who don't believe we are experiencing unprecedented warming or that warming is caused by man's activities.

One parent in Indiana, a PhD scientist, decided he'd had enough of his children being given a one-sided perspective on global warming. On the last Earth Day, his children's school was set for a school-wide showing of An Inconvenient Truth—that would have been the third time his kids had to watch the movie as a part of their school day. He began talking to teachers. He then went to the principal, and then the school board. He urged them to at least provide the other side of the story, informing them of another film they could show: Not Evil, Just Wrong, which analyzes some of the misleading information presented in An Inconvenient Truth. Not Evil, Just Wrong also highlights alternative theories about what might cause changes in temperatures and the potential consequence in terms of job loss and poverty of the policies that are being advanced in the name of combating climate change.

That parent in Indiana has been rebuffed by school administrators. So he is taking his case to the public. Unlike the opposition, he isn't trying to silence global warming alarmists. He just wants both perspectives to be presented to students. After all, just because it is Earth Day, schools aren't supposed to abandon their mission to educate students, provide facts, and encourage them to draw conclusions on their own.

Other parents need to find out about their schools' plans for Earth Day, and encourage teachers to give their students the balanced education they need and deserve. Schools aren't supposed to engage in indoctrination, no matter what day it is on the calendar.