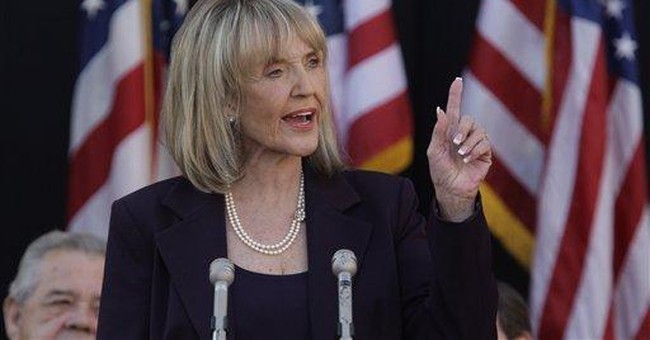 State power hardly seems in its heyday. The federal government controls nearly a quarter of the country's GDP. Washington is on the brink of passing health care legislation that would reorder one-sixth of the U.S. economy and give bureaucrats vast new powers to regulate and micromanage American medicine. The EPA toys with regulating carbon emissions under the auspice of the Clean Air Act, which could lead to new regulations not only of energy-intensive industries, but also of schools, hospitals and restaurants.

Meanwhile, states are struggling to close historic budget gaps. Unlike the federal government, which can shoulder a trillion dollar deficit and always has the option of printing money, state government's have little choice but to cut services or raise taxes. State officials almost seem to be pleading with their constituents to accept this fiscal reality.

Yet state governments are taking important actions and helping to serve as a voice of the people in rejecting some of government's excesses.

Poll and after poll shows an American public aghast by proposed health care reforms. People have been attending tea party protests, swarming town hall meetings and voting against supporters of the Democrats' health care legislation every chance they get.

Some state governments are expressing popular sentiment in another way. Earlier this month, Virginia enacted legislation that rejects the federal takeover of the health care system. Idaho adopted similar legislation this week. The new laws are designed to protect the rights of individuals to not buy government approved insurance. Virginia and Idaho are not alone in this effort: An estimated 36 other states have similar bills in the works.

States are also reflecting their constituents' changing sentiments when it comes to climate change. Gallup recently reported a significant drop in concern about global warming as an environmental threat. Nearly half of Americans surveyed thought the seriousness of global warming is “generally exaggerated.” That's up from 4 in 10 in 2009, and 3 in 10 in 1997. In 2003, 6 in 10 thought temperature increases were the result of man; now just five in ten do.

Unfortunately, Gallup didn't report about people's attitudes toward global warming legislation. Undoubtedly, many who believe in man-made global warming would still agree that any economy-crushing legislation – and cap-and-trade programs certainly qualify – is a bad idea in the midst of a recession.

Certainly this seems to be the opinion of Arizona's governor. Last month, Gov. Jan Brewer signed an executive order reversing the state's decision to participate in the regional cap-and-trade program known as the Western Climate Initiative. The cap-and-trade program was supposed to begin in 2012, but the Governor decided to pull Arizona out now. As the Arizona Republic explained, the Governor “made it clear...that Arizona will not endorse the emission-control plan or any program that could raise costs for consumers and businesses.”

California residents must wonder why their governor isn't following suit. California currently boasts one of the country's highest unemployment rates (12.5 percent). With an expected $20 billion government shortfall, encouraging more growth and economic activity should be the governor's top priority. Yet California still plans to implement an aggressive plan to reduce carbon emissions, using measures such as new regulations requiring the use of renewable energy, increased car fuel efficiency standards and other energy efficiency requirements. The state's nonpartisan legislative analysts' office has just admitted that the plan’s also a job killer. They wrote: “On balance, however, we believe that the aggregate net jobs impact in the near term is likely to be negative."

Not surprisingly, some Californians are taking matters into their own hands and pushing a ballot initiative that would delay implementation of the new anti-global warming measures until unemployment drops and stays at 5.5 percent for at least a year.

Lawmakers in Washington's bubble should pay attention to what's happening in the states. These actions are a vivid reminder of the people's will, and those same people will have another way of voicing their opinion at the ballot box in November.