Cal Thomas
|
Posted: Jul 11, 2019 12:00 AM
Share   Tweet
The opinions expressed by columnists are their own and do not necessarily represent the views of Townhall.com. 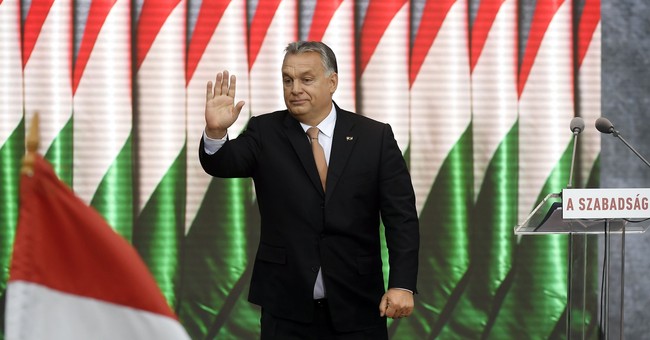 Two summers ago on a visit to Budapest, I asked the spokesman for the Hungarian government about the growing problem of migrants coming into Europe. He told me Hungary doesn't have a migrant problem because they don't have welfare programs. So, he said, migrants continue their travels to other European countries that do.

That's not the end of it, though. Hungary has created programs to help migrants stay in their own countries so they won't feel the need to flee to Europe. It is a model the U.S. should consider adopting beyond dwindling and often misdirected foreign aid.

The government calls it "Hungary Helps Project." It delivers aid directly to places affected by conflict, the driving force behind most migration. The assistance does not go through corrupt governments, but to churches and charities more easily monitored, who presumably have good motives.

It seems far less expensive and more politically advantageous than the floodtide threatening the unity and character of European nations and increasingly the United States.

The government says in just two years the program has helped 35,000 people to stay home. These include persecuted Christians, who are often ignored by governments and the media. In Nigeria, where thousands of persecuted Christians have been murdered, Hungary has provided 1 million euro ($1.2 million USD) to the Catholic Diocese of Maiduguri. The money is being used to aid in the country's educational and health infrastructure, which have been damaged by repeated attacks from the Islamic terrorist group Boko Haram.

An additional 500,000 euro (about $560,000 USD) has gone to social rehabilitation programs administered by Christ in Nations, which helps refugees return to their homes ravaged by the extremist group. It also supports agricultural efforts designed to improve the self-sufficiency of households, eliminate food shortages and treat diseases.

In the misnamed Democratic Republic of the Congo (because it is neither democratic nor a republic), Hungarian aid totaling 1 million euro has been targeted for an eye clinic run by the Brother Richard Foundation for the Sick. An estimated 10,000 patients receive direct help, but because of the lack of good health care, the clinic's practice extends to 8 million people.

Ethiopia is another African nation receiving Hungarian aid. In a spirit of ecumenism, not only Catholic services receive funds; so does the Ethiopian Evangelical Church. The Mai-Aini refugee camp has been provided with 1.5 million euro (about $1.6 million USD) to offer shelter and basic services, including clean water, education and support services for about 15,000 Eritrean refugees. The Ethiopian Orthodox Church in Addis-Ababa has also received 500,000 euros in support.

Tristan Azbej is Hungary's state secretary for the Aid of Persecuted Christians. In an article for the About Hungary website, he writes: "During the peak of the migration crisis in 2015, the Orban Government was widely criticized by international actors for taking a firm stance (against undocumented aliens). Among those voices, some said that Hungary was acting heartlessly. Our approach is simple: To provide an alternative to the exploitation of human traffickers and manipulation of pro-migration NGOs, we are doing everything in our capacity to enable those in need to stay in their homelands. In the words of Prime Minister Orban: 'Trouble should not be brought here, but assistance must be taken to where it is needed.' And that's exactly what we endeavor to do."

The Western media and liberal politicians have denounced the prime minister as a far-right ideologue, but this program appears to be working. Most people might think it a more sensible approach to the wave of humanity flooding Europe and increasingly the U.S., burdening services and resources.

Again, it has the added benefit of saving money, which ought to interest everyone.