The UN: Once 'Useless,' Now Useful

Cal Thomas
|
Posted: Sep 21, 2017 12:01 AM
Share   Tweet
The opinions expressed by columnists are their own and do not necessarily represent the views of Townhall.com. 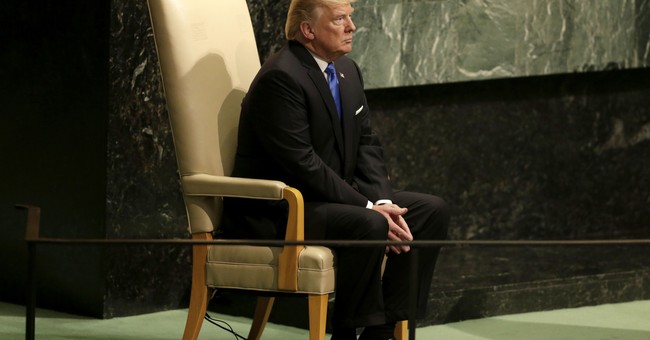 While campaigning for the presidency, Donald Trump more than once referred to the United Nations as a "useless" organization and "not a friend of democracy."

In his speech Tuesday to the 72nd Session of the United Nations General Assembly, he apparently has discovered the often dysfunctional body can be useful if it adopts the reforms he is proposing and accepts an agenda that includes uniting to stop North Korea from obtaining nuclear weapons and missiles to strike at the U.S. and other targets.

This may have been Trump's finest speech as president. Written by Stephen Miller, Trump's senior policy adviser, it was clear about the president's objectives and concise about how he and any nations that wish to join him might hope to achieve them.

Israeli Prime Minister Benjamin Netanyahu could barely stay in his seat. He said of the president's address: "In over 30 years in my experience with the U.N., I never heard a bolder or more courageous speech. President Trump spoke the truth about the great dangers facing our world and issued a powerful call to confront them in order to ensure the future of humanity."

Using his new nickname for North Korean dictator Kim Jong-Un, Trump said the "rocket man" is on a "suicide mission" and that if he persists in his nuclear ambitions, North Korea will be "destroyed." How to do this without causing massive civilian deaths is the question. Trump framed the issue as one of good vs. evil: "If the righteous many do not confront the wicked few, then evil will triumph. When decent people and nations become bystanders to history, the forces of destruction only gather power and strength."

While thanking Russia and China for voting to stiffen sanctions against North Korea in the Security Council, the president also criticized both nations: "We must reject threats to sovereignty, from Ukraine to the South China Sea," an apparent reference to the Russian occupation of the former Soviet territory and China's opposition to an independent Taiwan.

The "corrupt and destabilizing regime in Cuba" was also a target, noting his recent announcement no sanctions would be lifted against the communist regime "until it makes fundamental reforms."

Venezuela has been brought "to the brink of total collapse" by the socialist dictator Nicolas Maduro. The president said that regime "has destroyed a prosperous nation by imposing a failed ideology that has brought poverty and misery everywhere it has been tried." To defenders of socialism, he said, "The problem in Venezuela is not that socialism has been poorly implemented, but that socialism has been faithfully implemented."

On Afghanistan, the president said, "from now on, our security interests will dictate the length and scope of military operations -- not arbitrary benchmarks and timetables," a clear reference to the policy of former President Obama.

He called Iran a "murderous regime," which "masks a corrupt dictatorship behind the false guise of a democracy." He called the Iran nuclear deal made by the Obama administration, "one of the worst and most one-sided transactions the United States has ever entered into" and while not vowing to immediately cancel it, he added, "don't think you've heard the last of it."

There was praise for the U.N.'s humanitarian work and a call for all nations to protect the idea of sovereignty, security and success for themselves as the best guarantee of peace.

Clearly, the president was trying to mobilize a lethargic world body to act in its own and the world's best interests. He laid out the threats and the opportunities. The question is will enough of the non-rogue nations acknowledge them and act to eradicate the threats they pose while taking advantage of the opportunities freedom offers?