Trying Terrorists in U.S. is Dangerous 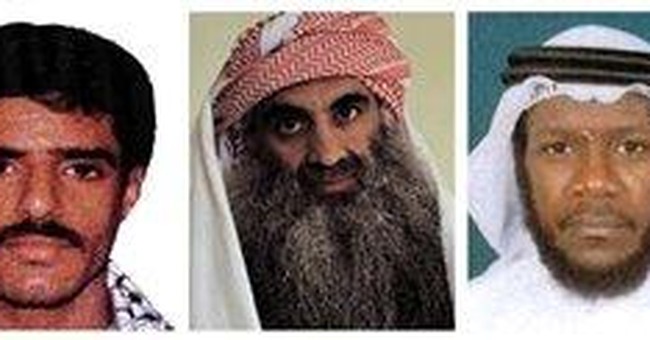 The Obama administration has chosen the wrong New York venue to try five co-conspirators in the Sept. 11, 2001 terrorist attacks on the United States. Instead of a Manhattan courtroom less than a mile from the site of where the World Trade Center stood, the government should have chosen the Bronx Zoo, because a zoo is what will be created when this terrorist trial is held.

In announcing the decision to try in a civilian court these "enemy combatants," as the Bush administration rightly described them, Attorney General Eric Holder said, "For over 200 years, our nation has relied on a faithful adherence to the rule of law to bring criminals to justice and provide accountability to victims. Once again we will ask our legal system to rise to that challenge, and I am confident it will answer the call with fairness and justice."

The administration's first mistake is to label these men "criminals," as if a terrorist attack and the announced objective of forcibly "Islamisizing" America were the same as robbing a bank. The 9/11 terrorist attacks were an act of war, as much as if a nation-state had attacked us. Trials should not be held for war criminals until the war has been won.

House Minority Leader John Boehner correctly called civilian trials a victory for liberal special-interest groups, which put those groups' interests "before the safety and security of the American people." Boehner added, "The possibility that Khalid Sheik Mohammed and his co-conspirators could be found 'not guilty' due to some legal technicality just blocks from Ground Zero should give every American pause."

The trial could also serve as a venue for trying the Bush administration and second-guessing decisions that kept America safe after 9/11. Secrets might be revealed that could be used by terrorists to harm us again. And if the terrorists must have a jury of their peers, does that mean fellow Muslims might be included? Could that end in a hung jury or a mistrial?

Attorney General Holder assures us that conviction of the "criminals" is a virtual certainty. Anyone who follows our quirky court system knows that innocent people are in prison and murderers walk the streets. It is anything but a foregone conclusion that these men will be convicted, but it is likely that damage will be done to the United States, which is the primary objective of the terrorists.

What do we hope to accomplish by trying these mass murderers on U.S. soil? Will it produce more troops from our NATO allies to finish the job in Afghanistan? Not likely. When the world sees how good and fair we are, will it love America more and will terrorists decide to kill us less? Only in the world of make believe inhabited by ACLU lawyers.

This trial will be broadcast worldwide. It will show America's enemies, not the "fairness" of our justice system, but a group of men who can stand up to "the great Satan" and shake their fists in our face. It will also serve as a recruiting video for future terrorists because it will demonstrate what, to them, is weakness. A strong nation would have tried these men in the military tribunals Congress authorized for that purpose. A weak nation imputes rights to noncitizens who want to do away with the very rights we are now going to afford them.

You don't need an imagination to predict that crazies will show up at this trial, including Islamic terrorists in training who want to emulate the acts of the defendants. Some might be "inspired" to create another event at or near the courthouse. Cable TV will carry it all.

What if the terrorists are acquitted? Who will take the blame? It won't be President Obama. Because of numerous motions, the trial will likely be delayed for three to five years. Obama will either be out of office or into a second term by then.

For those who believe this is a very bad decision with little upside for America, the best we might hope for is that the judge is a Jewish woman. That would be sweet revenge for these misogynist anti-Semites.