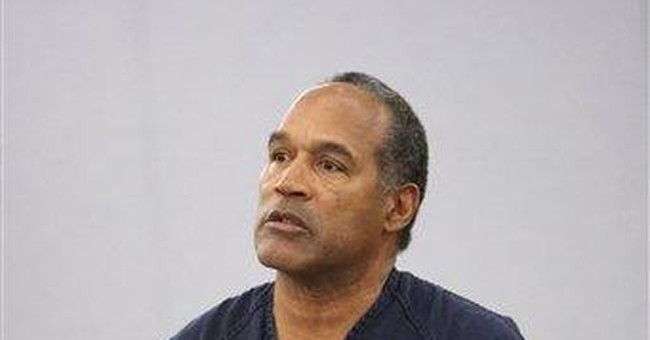 In the matter or Orenthal James Simpson, justice was a little late, but last Friday -- 13 years after justice was delayed in a Los Angeles double murder trial -- it refused to be denied in a Las Vegas courtroom. Simpson was sentenced to between nine and 33 years behind bars for his role in last year's kidnapping and armed robbery of two sports memorabilia dealers at Palace Station Hotel and Casino.

District Judge Jackie Glass said this trial had nothing to do with the previous murder trial at which Simpson was acquitted for murdering his wife, Nicole, and her friend, Ronald Goldman. Maybe not in her eyes, but in the eyes of virtually everyone else who believes the earlier verdict was a miscarriage of justice, this trial was just deserts.

In a statement before sentencing, Simpson said he didn't know he was "doing anything illegal." He must have been the only one. Simpson and his co-conspirators carried two guns, one of which was displayed, when they entered a room in hopes of retrieving property Simpson said was his. It apparently escaped the participants that stealing someone else's property is illegal and if Simpson had bothered to call the police, the law might have been on his side for a change.

Simpson had led a privileged life prior to the events that led to the "trial of the century." His athletic skills earned him millions. Acting and product endorsements earned him millions more. But all of that wasn't enough. Like some other celebrities -- and some politicians -- enablers surrounded Simpson and he came to believe he was entitled to whatever he desired. If he lusted after it, it seemed perfectly all right to O.J. Simpson that he should have it. If he was denied something, it appears, he saw nothing wrong with resorting to violence in order to get it.

Culture once frowned on such thinking, but no more. It doesn't matter why you're famous, only that you're famous. Celebrity, not character and worthy accomplishment, is now considered the highest goal. Many enablers helped O.J. avoid the possibility of coming to his senses.

Consider the definition of justice stated above. The concept of deserving anything deemed negative is now foreign in our contemporary culture. How do you punish anyone for anything if nothing can be judged right or wrong? This is the product of courts that have misread the First Amendment and a growing number who have abandoned an immutable standard in favor of moral relativity that is tailored, like a suit, to fit the individual.

There is a reason trials are still conducted. It is not only for the purpose of enforcing the law, but to reinforce social mores. One could hear repeated appeals to those mores in Judge Glass' remarks. It helped, as she said, that the entire crime and the post-crime party during which O.J. and his co-conspirators celebrated their "accomplishment" were recorded on audiotape. Many other norms, laws and standards have been recorded in a different sense -- from the Ten Commandments to the common law. As humanity progressed (or regressed), becoming more self-sufficient, we have felt it unnecessary to be constrained by anything, or to be held accountable to anyone.

Such thinking goes something like this: If you have a problem with anything I do, believe, or think, it's your problem, never mine. There is no overarching creator/authority, and so I am entitled to do as I wish. This life is all there is and so who are you to deprive me of anything I think will make me happy, happiness now being the highest and only goal of humanity? Good feelings, not well-doing are all that matter today. Who earns cover stories in popular magazines because of their virtue?

Even if he serves the minimum sentence, which is unlikely, life is effectively over for the 61-year-old Simpson. He received justice for what he did this time and retroactive justice for what a civil court concluded he did to his wife and Ron Goldman. Simpson got what he deserved. That should provide some satisfaction to the families of Ron Goldman and Nicole Brown Simpson, whose "stolen property" is beyond recovery.