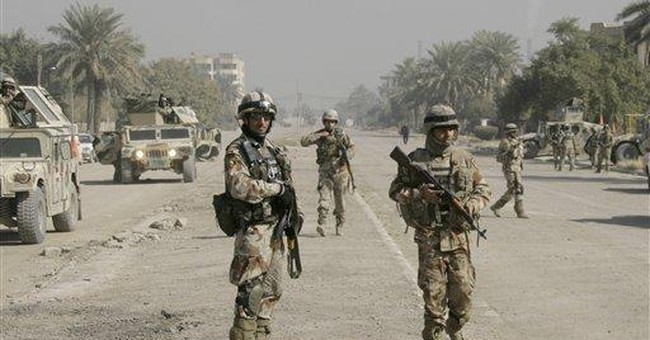 Since 2001 when "the war on terror" began, the Office of Management and Budget (OMB) reports $649.9 billion has been appropriated for Operations Iraqi Freedom and Enduring Freedom (Afghanistan). In the budget President Bush just submitted to Congress, there is a request for an additional $108.1 billion for 2008 and $70 billion for 2009.

The cost of these wars has been largely borne by the American taxpayer, while the benefits of success in Iraq and Afghanistan will reach far beyond the borders of those countries to the world. If Islamic extremist can be quelled in Afghanistan and Iraq, people the world over will literally breathe freer. Since so many will benefit, isn't it fair to ask them to help subsidize the effort?

USA Today reported last week that America's "allies" in the war on terror have provided what amounts to chump change. Countries that made large commitments to rebuild Iraq have paid just 16 percent of what they had pledged. According to a new report by the Special Inspector General for Iraq Reconstruction, other countries committed to contributions of $15.8 billion during and after a conference in Madrid in October 2003. The countries that have given the least are the ones that have the most resources to give - and possibly the most to lose, as some are targets of al-Qaida's efforts to replace Arab governments with Taliban-like leaders.

The largest shortfalls in pledges by 41 donor countries, according to USA Today, are from Saudi Arabia and Kuwait who spent 17.4 percent and 27 percent of the $500 million each had pledged, according to a separate report released last month by the Government Accountability Office. These are countries we saved in the first Gulf War. So far they have paid just $135 million (Kuwait) and $87 million (Saudi Arabia) out of a combined total commitment of $1 billion. That's still pocket change compared to the hundreds of billions it is costing us.

This is beyond outrageous. Here we are spending near record amounts on gasoline and home heating oil - money that goes to those nations that sell us the oil - and they in turn refuse to pay more to help win a war who's victory would help repel the same fanatics who also hate them.

Rep. Gary Ackerman, who chairs the House Foreign Affairs subcommittee on the Middle East, makes the point: "They're charging $100 per barrel of oil, making record fortunes, lecturing everyone else, and then they stiff everybody, including their cousins who they contend to be so very concerned about."

The figures back him up. According to the Department of Energy, "from 2003 through 2006, Saudi Arabia exported about $95 billion in crude oil to the United States, as its average price doubled from $25 to $56 a barrel." During his visit last month to the Middle East, President Bush obtained more promises from several leaders of Arab states to do more. We'll see if those pledges have any more currency than previous unfulfilled promises.

The under-responsiveness has not just been in the Arab world. Money and other forms of assistance have been lacking from countries that are also threatened by Islamic extremists. Spain seems to have come closest to fulfilling its pledge. The GAO says of the $248 million Spain promised, it has paid $213.7 million so far. And Japan, according to a recent report to Congress, has pledged and disbursed more assistance to Iraq than any other individual country except the United States.

At a minimum, we should send Iraq and Afghanistan a bill for what we have done and are trying to do for them, or ask for price cuts on Iraqi oil. Thousands of American lives have been lost and the financial cost is enormous, as we seek to advance freedom for others. While a freer world is also in America's interests, the people of Iraq and Afghanistan stand to benefit the most. To have these and other nations in the region receive what amounts to welfare while charging us top dollar for oil - and using some of those profits to underwrite radical Islamic extremism - is doubly offensive.