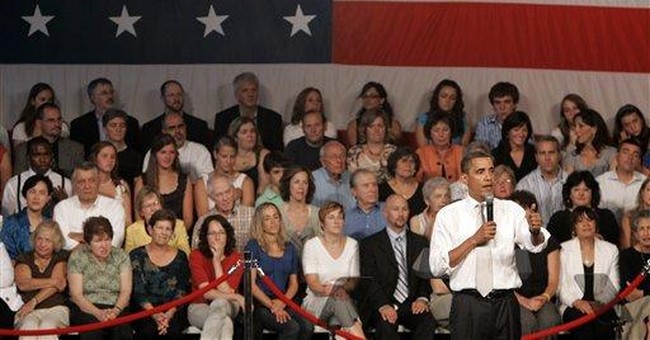 By this time, I’m sure we’ve all heard more than we care to about Professor Henry Gates. Still, I can’t let it go without tossing in my two cents. Admitting he didn’t know the facts of the case didn’t prevent President Obama, allegedly our first post-racial chief executive, from siding with the black professor and admonishing a white Cambridge policeman. Nothing too surprising about that, inasmuch as he appears to be far more concerned with the health and comfort of the Islamic terrorists down in Gitmo than he is with America’s elderly citizens.

My own field of study is liberals. As I see it, the major difference between Prof. Gates and me is that he gets paid a lot of money, gets to eat in the faculty dining room and when he acts in a disorderly manner, he’s the one who not only gets the apology but gets the President of the United States to defend his boorish behavior.

The other day, a reader sent me an e-mail in which she stated: “Obama is economically illiterate, 100% politically motivated, a bold-faced liar, thin-skinned and completely incompetent. And I must say that, contrary to the majority of the population, I believe he is inarticulate. I don’t know what it is that others are seeing, but it certainly escapes me.”

In response, I wrote, “Apparently they see the great and powerful Oz, whereas you and I see the mumbling, bumbling bumpkin that Toto exposed behind the curtain.”

The truth is, it’s not just Obama who confounds me. It’s all liberals. I mean, doesn’t it even occur to them that when a conservative points out that Obama, Pelosi, Schumer and Barney Frank, are burying America in trillions of dollars of debt that saying, “Well, Bush left us with half a trillion dollars of debt” isn’t much of a rejoinder?

Something else that baffles me about those on the Left is that even though one of their major bugaboos over the course of the past hundred years has been the monopoly, a single soulless entity that had the power to determine the price of gasoline or the life of a light bulb, they hale monopolies so long as they’re run by the criminally inept bureaucrats in Washington. I mean, who in his right mind would hire the likes of Chris Dodd, Henry Waxman or Barbara Boxer, to run a hardware store, let alone a major car company or the banking industry?

Perhaps even the Democrats are finally reading the writing on the wall. Obama’s poll numbers are dropping like a rock, and a little more than a year from now every congressman and a third of the senators will be up for re-election. There was a reason that Harry Reid announced that Obama’s health plan wouldn’t come up for a vote until after the summer recess. At the risk of being a cockeyed optimist, it’s my hunch that during the recess the Democrats are going to catch so much flak from their constituents that Obama’s health bill will be buried right next to Bill Clinton’s up there on Capitol Hill.

I’m sure that Obama will continue to blame Bush and the Republicans even if every Democrat votes against the damn thing, but the important thing is to keep socialized medicine where it rightfully belongs -- in England, Canada and Cuba.

It’s not easy determining which aspect of Obama’s bill is the most vile -- the fact that the costs would be astronomical, that health care would get progressively worse or that young illegal aliens would rate higher on the food chain than older American citizens. In fact, considering that the President subscribes to the notion that, instead of a life-saving operation, any old person not holding elective office or named Obama, should just take pain pills for what ails them, you could say that it’s Obama’s final solution for America’s elderly.

I heard Rush Limbaugh say, “This health care plan is the single greatest tool to regulate every aspect of our lives this government could ever have.”

To which my response was, Obama has a great many tools at his disposal, including pork-laden stimulus programs, Cap and Trade and multi-millions earmarked for ACORN, but they all look like shovels with which to bury America.

As for his health care plan, calling it a cure for an ailing system is like calling assisted suicide a cure for heart disease.