The Antidote to Obama 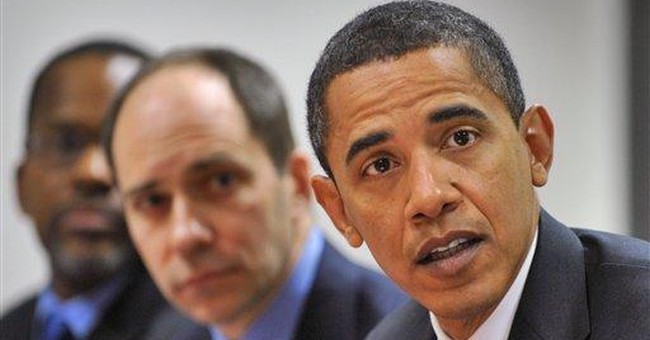 I have written with an air of despondency about the bleak future I see for conservatism in America. For one thing, Obama won the election by capturing the votes of virtually every demographic group imaginable, except for older white guys. And the one thing you can say about us, individually and as a voting bloc is that, alas, we’re not getting any younger.

The most discouraging sign was that Obama, the pro-choice candidate, defeated McCain, a pro-lifer, by a 2-1 majority among Hispanics. Apparently, their bishops had no more influence over them than I did.

During his upcoming administration, Obama has promised to out-do FDR by putting an additional 2.5 million people on the federal payroll. He has also threatened -- I mean, promised -- to create some sort of civilian paramilitary group that sounds suspiciously like Hitler’s brown shirts, but I could very well be mistaken. For all I know, Obama may dress them in blue.

One can easily see that President Obama intends to follow FDR’s game plan by creating a population dependent on the government’s largesse, and thus beholden to the Democratic party. If anything, Obama’s own plans can be even more ambitious than Roosevelt’s were, thanks to those dependable enablers, Pelosi and Reid.

I know there are conservatives who are counting on the Democrats fumbling the ball, as Jimmy Carter did, and then having someone like Ronald Reagan ride in, much like the cavalry in a John Ford western, to rescue America. But I think a far likelier scenario is that the liberals will pass the 28th amendment, nullifying the 22nd, so that Obama won’t be limited by term limits.

After all, if New York’s Mayor Bloomberg could do away with term limits because he decided that he and he alone was up to the job of running the Big Apple, what’s to prevent the folks who seem to think that the second amendment isn’t worth the parchment it’s written on, and that the Fairness Doctrine trumps the first amendment, from doing whatever the heck they want?

This is not to suggest that despair and anguish should be the order of the day for conservatives. I know that armed insurrection is a notion that has occurred to a quite a number of right-wingers, and while I admit that popping off a round or two in the general direction of Michael Moore, Rosie O’Donnell and any number of left-wing politicians is undeniably appealing, I really wouldn’t want to promote a second war between the states. At least not so long as there was a viable option. And, fortunately, there is. There’s Canada!

During the American Revolution, Americans who were loyal to England crossed the border. I suggest that we conservatives who are loyal to the America conceived by our forefathers pack up our principles, our values and our Constitution, and move north.

We may not have the numbers to win a presidential election here in the United States, but our 58 million votes in Canada (current population: 33,500,000) would be more than enough to ensure a conservative plurality for the foreseeable future.

Furthermore, having learned from experience, I propose that our first order of business should be to erect a large wall along our southern border in order to keep out the riff-raff.