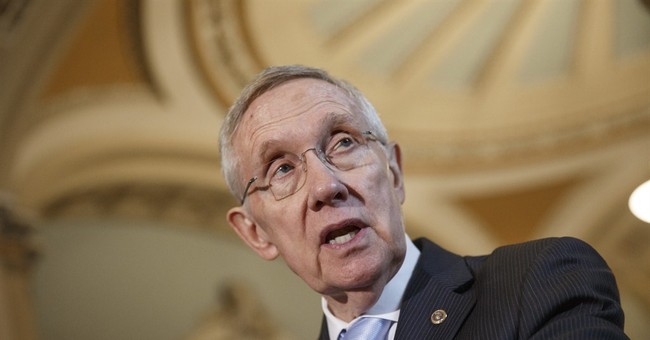 When describing my ill thoughts to someone recently about Harry Reid, the person asked me: “Who is worse -- Barack Obama or Harry Reid?” My immediate answer was Harry Reid. I can understand someone taking a different position on that question. Let me explain why there is no one I have ever loathed more in American government than Senator Harry Reid (D-NV), who hereafter will be referred to as the nickname I gave him years ago – The Undertaker.

If you have read history to understand the position that The Undertaker now holds – Majority Leader of the United States Senate – you start with Robert Caro’s book Master of the Senate. The book is part of Caro’s extensive series on Lyndon B. Johnson which has redefined political biographies. Johnson created the modern majority leader. Before that the position did not have a high level of influence. Johnson worked with what was referred to as the “Old Bulls” of the Senate (committee chairs) to get legislation passed. He made the Senate a more effective place.

The Undertaker has completely bastardized the position. He has created a Senate of 1 -- himself. Every piece of legislation, every debate, and every amendment goes through his hands, and basically nothing gets done. For many years, until last year, he would not allow a budget conference with the House as required by law. That is why we have had no budget most years and again this year. We just get continuing resolutions so the government does not shut down. Nothing gets done and it is all because of Reid.

The press focuses on the one piece of legislation that actually passed the Senate; Comprehensive Immigration Reform that was never taken up by the House for multiple reasons including its immense length. The press does not mention the 350 bills passed by the House which have never been brought to any level of discussion in the Senate. Many of these bills are aimed at job creation or tax simplification, but The Undertaker kills them. No discussion allowed even if there is a Senate sponsor. No one gets a say except The Undertaker.

Recently I had the good fortune of sitting next to Senator Marco Rubio (R-FL) at a small luncheon. I asked the Senator why Democratic senators allow The Undertaker to emasculate them. Rubio stated Reid prevents the senators from having to vote on bills that will put them on record. I then stated that the senators cannot even make amendments to the few bills that reach the Senate floor and asked why they tolerate it. He said “It appears they are a little tired of that.”

It is not just his handling of legislation that makes him so harmful to our democracy. This man will go on the Senate floor and say anything about anyone without caring a bit about whether it is true or whether he is demeaning the Senate. For example, you remember he went on the floor and stated Mitt Romney had not paid taxes for ten years. He had no substantiation for the statement, but said he was told by a reliable source (I believe that was Paris Hilton). His favorite thing to do these days is regularly go on the floor of the Senate and castigate the Koch Brothers. He just makes up things talking about how these “Rich Guys” are trying to buy elections. While he is demonizing these honest and hardworking Americans, he is running the Senate Majority PAC which has raised more money this election cycle ($33 million) than any other PAC. These monies are all collected from “Rich Guys” who happen to like Harry Reid. That is because these Americans are granted favors by The Undertaker through our disgusting system of crony capitalism. These payments are called bribes.

Then we have the issue of how this career politician has become worth between $2.9 and $6.7 million. That does not include his rich pensions from various political positions. Most interesting is the fact that this “man of the people” resides at the Ritz-Carlton in Washington, D.C., at a discounted rate of $3,000 per week. While House members sleep in their offices this man brazenly lives a life well beyond the means of almost all Americans.

We have an election coming up on November 4th. We have a chance to rid our society of this menace. Republicans just need to pick up six seats in the Senate. The good news is they have terrific candidates, most of whom I have had a chance to meet. Last week I met the four women: Joni Ernst of Iowa, Monica Wehby of Oregon, Terri Lynn Land of Michigan, and Shelley Capito of West Virginia. Supporting these excellent candidates provides two benefits: getting rid of The Undertaker and shutting up the Democrats about the “War on Women.”

I have also met Cory Gardner of Colorado, Thom Tillis from North Carolina, Bill Cassidy from Louisiana, Tom Cotton from Arkansas, Dan Sullivan from Alaska, Ben Sasse of Nebraska, and Ed Gillespie of Virginia. They are likewise all terrific candidates.

We have a chance to put a squad of first class people in the Senate. We will break the logjam in our government caused by The Undertaker. You should do whatever you can between now and Election Day to get these candidates elected. If you live in one of these states you need to work for them every day between now and November 4th. If you live elsewhere go to these candidates’ websites and give as much money as you can.

We need to retire The Undertaker as Majority Leader. He is a crooked, sick man. He has no respect for our democracy. Please help me get rid of him.