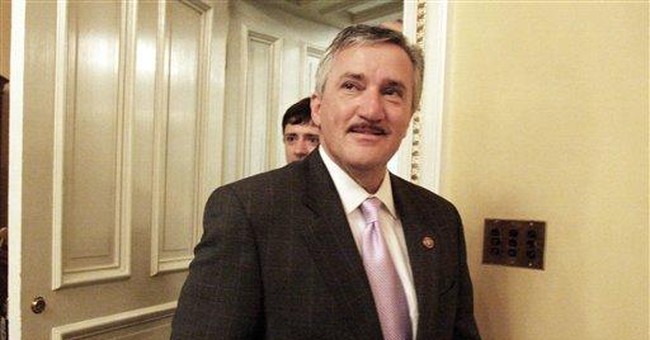 Over the summer, the race for Mississippi’s First Congressional District has continued to develop into one of the must-watch contests of the year.  Republican Alan Nunnelee is seeing measurable gains as he runs a solid campaign to unseat the pandering Travis Childers, who’s clearly starting to recognize the writing on the wall.  In an effort to derail Nunnelee, Childers has started has launched baseless attacks against his opponent which were described by the Commercial Dispatch as "unfair," "lame," and "misleading".

When you compare his reckless actions during this campaign to his record in Washington, Childers’ actions are hardly surprising.  This is the same person who has touted the benefits of his party’s failed $787 billion “Stimulus” package, backs Nancy Pelosi over 80% of the time, and has let the national debt spiral out of control.  In fact, Childers’ support for Pelosi has put his district on track to see taxes for average households to increase $1,341 since House Democrats just voted to return to their districts to campaign rather than hold a vote on tax relief.  You also have to keep in mind - all of this has happened in less than two years.

With this kind of track record, the stakes are too high to give Childers a full term in Congress.  Luckily, this fall, voters have Alan Nunnelee on the ballot as a choice for a new direction.  He’ll be ready to get to work on Day One and will help to get Mississippi back on track.

Today’s Race of the Day brings us to northern Mississippi and the state’s First Congressional District.  Currently represented by Congressman Travis Childers, who won a surprise victory in a May 2008 special election, the battle for this seat is already heating up.  State Senator Alan Nunnelee has worked hard over the past year in preparing his challenge to Childers and is steadily moving towards success in November.

In this R+14 district, MS-01 – which is formed around the population centers of Columbus, Oxford, Southaven, and Tupelo – is one of the best Republican pick up opportunities in the country.  This seat has only voted for a Democratic presidential candidate once since 1956 and elected then-Congressman Roger Wicker (R) with 63% of the vote in 1994.  Senator McCain won here with 62% of the vote in 2008, as did President Bush in 2004.

In 2008, Travis Childers surprised many in the political field when he narrowly beat Southaven Mayor Greg Davis in a special election following incumbent Roger Wicker’s appointment to the U.S. Senate.  Childers won the election, going on to beat Davis in the general election by a slightly wider margin.

This is clearly a district with a strong Republican base and Childers’ voting record over the past two years has led to an unfavorable opinion amongst the electorate.  Though Childers refers to himself as a Blue Dog Democrat, his alliance with the Pelosi agenda has been blatant. He has voted with the Democratic Party 81.5% of the time, demonstrating where his true loyalties lie.  While he voted against the final version of the healthcare takeover bill, he waited until just a couple days before the vote to make his decision known – after it was clear Pelosi had the votes to pass the legislation. Childers also voted for the failed “stimulus,” the $787 billion massive spending package that has piled debt on the backs of the next generation and done nothing to bring down unemployment.

Prepared for a tough battle against Childers is State Senator Alan Nunnelee, whose political and personal background will resonate deeply with voters in the First District.  Over the years, Alan has been instrumental in cutting down on wasteful spending and working to ensure his constituents are properly represented.  His work on Medicaid led to a decrease in the use of government funds and his pro-job growth agenda led to the establishment of a Toyota manufacturing plant to be located in Blue Springs, Mississippi, bringing in much needed jobs to the region.  Nunnelee has also worked hard to protect the values of the people of Mississippi, championing the rights of unborn children, working to preserve the sanctity of marriage, and fighting to protect the phrase ‘In God We Trust.’

With the Republican primary in the past, all of the contenders have coalesced their support behind Alan and our party is united heading into the November election.  Just last week, a poll was released showing Alan with an 8 point lead over Childers – highlighting the competitiveness of this race.