Brianna Heldt
|
Posted: Jun 01, 2018 9:30 AM
Share   Tweet
The opinions expressed by columnists are their own and do not necessarily represent the views of Townhall.com. 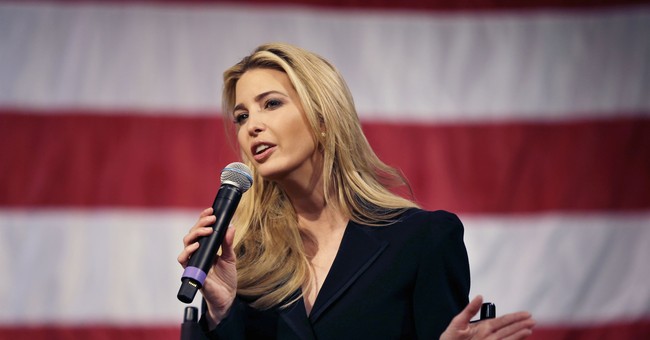 Can someone please explain to me why liberal feminists have such a double-standard when it comes to Ivanka Trump?

On the surface, Ivanka’s a woman every feminist should love. She’s beautiful, carries herself with confidence, and is both a shrewd and effective businesswoman. Ivanka has her own jewelry and clothing lines, is a former model, and holds a degree in economics. And as if all of that weren’t enough, she’s married with three children.

Basically the epitome of what’s possible for women, right?

Well, apparently not if you’re a liberal feminist.

Thanks to Ivanka’s last name, which of course she shares with President Donald Trump, she is inexplicably subjected to public scorn and ridicule by the very feminists who ought to embrace her. This in spite of her accomplishments and I-can-do-anything attitude. Could it be that being affiliated with and related to a conservative politician--more specifically, a conservative politician who’s been declared by liberals as public enemy number one--is enough to trigger otherwise successful-female-loving feminists?

And is it also possible that Ivanka’s seamless blending of motherhood and wifedom with business sense and career is almost equally offensive to the feminists among us? Ms. Trump is feminine in every sense of the word, and cultivates an image which seems to embrace the whole wife and mom thing with beauty and self-confidence. For shame!

By now we’ve all heard about how, just a few days ago, Samantha Bee called Ivanka Trump a “feckless c---” on television. (If you hadn’t heard, yes, you read that right.) Ivanka’s crime? Posting a photo of herself with her son on Instagram.

Oh but don’t worry, the vile slam was totally warranted--because, you know, Samantha Bee doesn’t approve of President Trump’s immigration policies. Ms. Bee also suggested Ivanka “put on something tight and low-cut” to go talk to her dad about changing those policies. Gross.

So where is the outrage among the normally frenzied virtue-signalling, card-carrying feminist members of the mainstream media? Where is the passionate “me too” mob, defending Ivanka against a terribly disgusting and derogatory slur against women? Where are the (well-deserved) cries of anti-semitism (Ivanka is a convert to the Jewish faith)? Or the accusations of gender bias? Does the expectation of basic human decency only extend to a certain class or demographic of people?

The consistent hypocrisy on display when it comes to the liberals’ treatment of Ivanka Trump is nothing short of sickening. Women are, in 2018 it seems, only permitted to vote and believe a certain (narrow) way, if they wish to be treated with respect. Feminists pay constant lip service to this notion of us women sticking together, looking out for our common interests, and the idea that we can do whatever it is we wish to do. But clearly, that only goes so far. It is only relevant when we’re talking about their decided-upon, far-left agenda. No going off-script, unless you want to be torn to shreds. No feminist support for an accomplished, confident woman like Ivanka Trump, who opposes Planned Parenthood abortions, and supports her father’s presidency. She’s doing it all wrong, you know.

To Ivanka’s credit, she never much seems to feed the trolls. What does it matter what the critics say, I suppose, when you’re happy and secure in who you are, and what you’re about? And she is of course not the only strong, conservative woman to wind up in the cross-hairs of angry progressive feminists: Kellyanne Conway and Sarah Huckabee Sanders both also come to mind. Both women, like Ivanka, have an impressive list of credentials that only continues to grow. Both prove that women can do everything from changing diapers to standing down the entire White House press corps--all in the same morning. Intelligent, articulate, and opinionated. Wholly devoted like Ivanka Trump to the country, and families, they love.

If that doesn’t qualify you as a good feminist, I’m not so sure I want to be one.