Brian McNicoll
|
Posted: Apr 15, 2016 12:46 AM
Share   Tweet
The opinions expressed by columnists are their own and do not necessarily represent the views of Townhall.com. 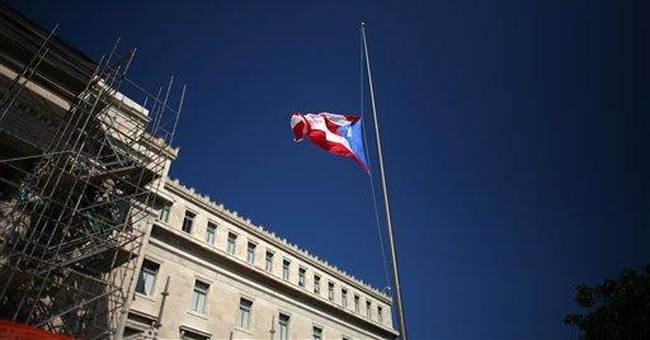 It’s not just the chickens that have come home to roost in Puerto Rico. It’s the hacks as well.

The whole thing can be summed up in two words – Hack City.

There were the public-sector union hacks whose contracts drove the Commonwealth into what is now estimated at $72 billion in debt. There were the government officials who encouraged this profligacy with indulgent hiring.

There are the hacks in Washington who just want to send a big check and forget the whole thing, rather than insist on the reforms that put Puerto Rico in these straits in the first place.

There are the hacks in Congress and Puerto Rico’s government who pushed through crippling public spending and rules, such as a minimum wage more than twice that of any neighboring competitor, that ensured the public sector would suck all the energy out of the private.

But as the crisis grows – as the governor defiantly announces he will pay commonwealth employees rather than bondholders as required in the commonwealth’s constitution; as Congress continues to whiff on legislation to address it and as talk builds of affording San Juan a bankruptcy-like restructuring scheme that would enable Illinois, California, New York and others to offload their debt on Washington – still more hacks have figured out how to make a buck off the island’s suffering.

The faces and names are so familiar, it’s almost as if the Obama White House let Puerto Rico get into this mess just to ensure a little post-administration income for some favored friends.

Puerto Rico has shut down state agencies and reduced others to bare bones operations. It has defaulted on debt payments twice now, once in the last month. Secretary of the Treasury Jack Lew says the Commonwealth is “in the midst of an economic collapse.”

But it has a contract with MillCo Advisors, a financial-restructuring firm led by former Obama Treasury Department official Jim Millstein that would pay up to $52.4 million. It has contracts with Cleary Gottlieb and Proskauer Rose, two Manhattan law firms, that could reach $37 million and $6.6 million respectively.

Another Manhattan firm, Kirkland & Ellis, is ordering pizza and who knows what else on Puerto Rico’s dime as well as charting it 16 cents per page for copying.

SKDKnickerbocker, a Manhattan communications and PR firm, has a contract for up to $3.4 million to handle marketing and press relations, including $500,000 for advertising. Anita Dunn, a former White House communications director, is a vice president for the firm.

And the point person on all but one of the contracts is Jennifer Cunningham, a lobbyist and former union official who is close to Gov. Andrew Cuomo and the former wife of New York Attorney General Eric Schneiderman.

Tellingly, so cozy is the relationship among the New York firms looting what’s left of Puerto Rico’s treasury that a statement released to the New York Post defending the contracts was said to represent the views of Knickerbocker, MillCo, Cleary Gottlieb and the Puerto Rican government. The statement, from Barbara Morgan, a Knickerbocker VP and former spokeswoman for Anthony Weiner’s race for mayor of New York, defended hiring all these consultants and said the figures the Post revealed were overstated because they were maximums.

Also tellingly, Morgan issued the statement twice – on Jan. 16 and Jan. 22. The first version put the Puerto Rico government’s defense of the consultants in the mouth of Victor Suarez, the secretary of state. The second, with four words changed, was attributed to Grace Santana, chief of staff to the governor.

We’re in the midst of a most unusual presidential campaign, one characterized by anger at politicians and frustration with a system that seems designed to reward the well-connected at the expense of taxpayers. Puerto Rico is this writ large.

It is a big, bloated bureaucracy that has spent the last decade proving hope is not a plan. It has made it virtually impossible to earn an honest living and impoverished a generation of its people.

At some point, the day of reckoning will come, and Puerto Rico will have to address its insolvency. It will have to reduce the size of government and change the rules to promote the return of a vibrant private sector. At some point, many of those highly paid public-sector employees will have to justify their salaries or move on.

At some point, all President Obama’s cronies in New York will have to find another way to make money. The Commonwealth already is close to running out of other people’s money. The time to change is now. The time to cast out the hacks and take governing seriously is now.

The people of the island – and the nation – can’t afford to wait any longer.