Despite Past Failures Of Career Politicians, President Trump Is Delivering for America’s Heroes

Brett Velicovich
|
Posted: Jul 27, 2018 9:33 AM
Share   Tweet
The opinions expressed by columnists are their own and do not necessarily represent the views of Townhall.com. 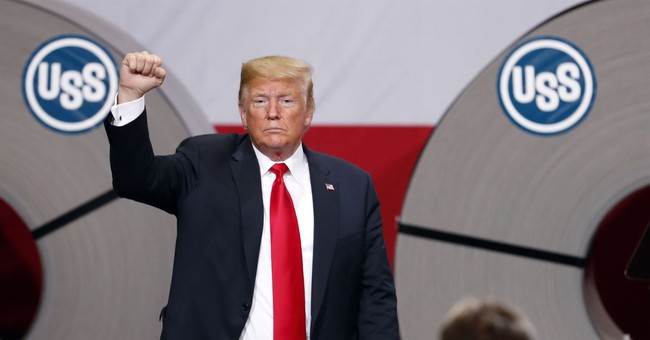 Veterans Affairs once represented everything wrong with big government. Its inefficiency and incompetence didn’t just waste taxpayer dollars, it cost the lives of many brave men and women who served our great country.

Where career politicians failed, President Trump succeeded in keeping his promise made to those who have served our country. “We will not rest until all of America’s great veterans can receive the care they so richly deserve. Tremendous progress has been made in a short period of time,” the President declared last year.

President Trump has created real change within one of the most inept and deficient agencies in government. "No one who defends our country in uniform should have to fight for their lives when they come back, when they come to their home,” the President said in June.

Thanks to President Trump, they will no longer have to.

The President started fixing the problems at the VA by giving agency administrators the power to terminate employees faster and more effectively. Since signing the VA Accountability Act last summer, the Trump administration has already removed more than 1,500 VA employees who failed to give our veterans the care they deserve.

After it was found that more than one-third of calls to the VA suicide hotline were left unanswered, the White House opened a brand new VA hotline staffed principally by veterans and veterans’ relatives to ensure that no complaint goes unaddressed.
President Trump’s Executive Order on Improving Accountability and Whistleblower Protection also established a VA Office of Accountability and Whistleblower Protection.

The administration has also sought to modernize the VA and make the most of available technology.

The VA’s “Anywhere to Anywhere” healthcare program, which allows agency providers to use tele-health technology to remotely treat veterans, has been expanded. VA Video Connect, an application which allows veterans and healthcare providers to directly connect from anywhere in the country, has also been rolled out in more locations. Finally, over 100 VA sites across the country have started using the Online Scheduling Tool, which allows veterans to schedule appointments from their phones, tablets, or computers.

President Trump was right when he said that veterans deserved a “real choice”, that the “Democrats didn’t want the vets to have choice”, and that we deserve the freedom to choose other healthcare providers when the VA can’t meet their obligations to those who sacrificed for so many.

More recently, the President delivered on a key campaign promise by signing the VA MISSION Act into law. The act allows veterans a broader choice of healthcare providers, including assistance from family caregivers.

President Trump was right when he said, “Our veterans, in many cases, are being treated worse than illegal immigrants, people that come into our country illegally.”

For years, career politicians have tried to fix the problems at the VA, but to no avail. Our own Senator Claire McCaskill, is the perfect example. Despite McCaskill’s efforts, her more than decade old career in the Senate has produced little to no results for our veterans.