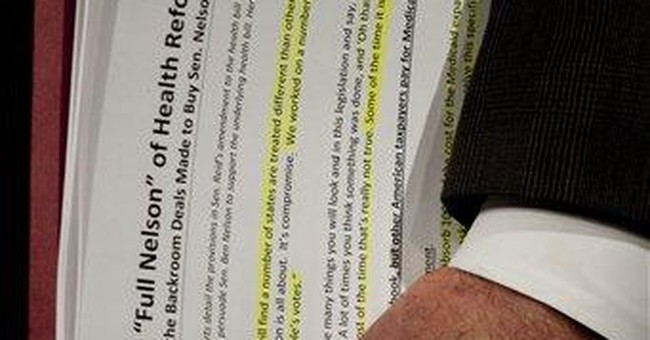 Americans sick over Congress' "health care" outrage should be glad to sniff the generally unpolluted air of Christmas Eve in order, at last, to hear the angels sing. Because if anyone ever took a political vote-counter for one of the heavenly host, it had to be a long time ago: not in the eight or nine months we've been anguishing over plans to overhaul the way 300 million-plus Americans pay for their health care.

If men were angels, President James Madison remarked with great discernment, no government would be necessary. What does the health care outrage tell us about human nature? Nothing complimentary. We learn that, carried away by the lust for power, particular politicians are prepared to cram their particular point of view down any and all throats.

The Democrats, on health care, want very much to cram their version of "health care" down the national throat. Nor do they care even to study and debate the legislation framed to this end. It's all about winning.

You have to want very much to win in order to justify: 1) riding down your opponents, as if they were peasants asking the right of free speech, 2) engaging in the pretense that the public understands and deeply desires you to win, 3) not least, arranging the finale for Christmas Eve -- an obscene, and very human, parody of the sacred:

"God rest you lousy Nazis now,/We've beaten you at last./You hate the sick, you hate the poor,/You creatures of the Past!/You thought to stop our Leader Bright with Warnings of Despair/Oh, now we have stuck it right to you, stuck it to you, Go away and leave Americans alone."

The child in the manger, as he grew, declined political ambitions. The amassing of power for power's sake was never his line. He sought power only over hearts and minds and, then, only to the extent that such power came of the donors' wholehearted accord. Definitely an odd duck: never swaggering about, never issuing orders of the do-this, do-that sort; inviting, instead of demanding, assent.

The Senate health care bill doesn't need dissecting here. Plenty of surgeons are available for the gruesome task. What needs pointing up instead, it seems to me, is the sheer violence of the occasion.

It is what happens when you start playing with people's lives: second-guessing their needs and wants, trumping principled objections as stupid or backward or -- as President Obama put it the other day, "The argument that opponents are making against this bill does not hold water." It just doesn't. Who says so? I say so. And I'm the president.

The Roman Empire had similarly smug, all-knowing habits. See what became of the empire. It stood for human force: to be sure in the interest of order. But is that not the very same end for which the congressional Democrats claim to be striving -- forcing others into harness for the good those others just can't see for themselves? Take that -- and no back talk.

Other Christmas Eves will come: happier ones, it may be. Less polluted with rhetoric and bombastic threats meant to ensure the adoption of speculative and suppositious plans for public improvement.

The contrast excites and explains meanwhile -- the Creator's great design for the world; the tiny, often tyrannical designs of his creations, more and more in each generation, it seems. Who wins this particular one in the end? The wise men or the rote reciters of talking points? The shepherds or those who just want to drive the flock to a different watering hole?

The angels? How about them? Be careful how you bet.