POTUS to MSM: This Is War!

Bernard Goldberg
|
Posted: Feb 28, 2017 12:01 AM
Share   Tweet
The opinions expressed by columnists are their own and do not necessarily represent the views of Townhall.com. 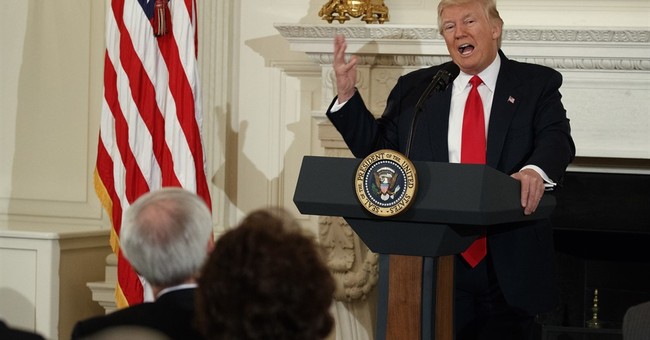 President Donald Trump wasn't shooting from the hip at the Conservative Political Action Conference the other day when he launched a blistering attack on what he calls dishonest and fake news. This wasn't something the president came up with on the fly. It wasn't part of his usual rambling stream of consciousness that we've come to expect.

No, this was a focused, intensified broadside. It was a declaration of war. Trump has been bad-mouthing the media for a while now, but this was a ratcheted up, coordinated assault on the news media that Trump claims make up bad news about him.

The crowd loved it.

Here's a good rule of thumb: You will never go wrong bashing the mainstream media to a conservative audience.

And one day before the president spoke at CPAC, the philosophical force behind a lot of his ideas, Steve Bannon, fired off a few rounds of his own. The media is the "opposition party," he told CPAC, and warned, "It's going to get worse every day for the media."

The Trump-Bannon war strategy isn't complicated: Eviscerate what is left of the news media's credibility; get the message into the national bloodstream that journalists cannot be trusted, that they make stuff up; and then when they report something about the president he doesn't like -- something that may do grave damage to his presidency -- they can always say: "You can't believe them. They're fake news."

Here's the CliffsNotes version of the war plan: Donald Trump and Steve Bannon want to bring down the media before the media bring them down. Period!

And while adversarial relationships between the press and the White House are nothing new, and while liberal journalists are tougher on Republican presidents than Democratic presidents, this is different. The animosity level this time around -- on both sides -- is in the unhealthy zone.

A lot of journalists viscerally detest Donald Trump as much as he detests them. More than a few think he's unfit for office and salivate at the prospect that he won't last.

I don't know if Nick Kristof of The New York Times is one of them, but he did write this in his column: "Trump howls at the news media, not just because it embarrasses him, but because it provides an institutional check on his lies, incompetence and conflicts of interest. But we can take his vitriol:When the time comes, we will write Trump's obituary, not the other way around." (Emphasis added)

I get the impression Kristof can't wait for that day. And I'm pretty sure he's not alone.

The president told CPAC that he's not against the media in general; he just wants reporters to be fair. "I'm against the people that make up stories and make up sources," Trump said. "They shouldn't be allowed to use sources unless they use somebody's name."

That's interesting since Donald Trump is no stranger to anonymous sources. His campaign staff often spoke off the record when he was running for president; he invoked unnamed sources when he fueled speculation that Barack Obama was born in Africa and wasn't a legitimate president; and -- oh, yeah -- just a few hours before Trump spoke at CPAC, his top aides held a press briefing at the White House, on the condition that they remain ... anonymous.

Is there bias at mainstream news organizations? Absolutely. But fake news isn't biased news, as poisonous as bias can be. Fake news isn't news with a mistake in the story -- or even news that quotes an anonymous source that got a fact wrong.

Fake news is fabricated nonsense, like the story that claimed Hillary Clinton was running a child sex ring out of a pizza parlor in Washington.

Yes, there have been times when journalists working at reputable news organizations put words in the mouths of people who didn't exist. But despite what President Trump's loyal fans believe, it's extremely rare.

When I was a correspondent at CBS News, I complained privately about bias and I wrote publicly about how it infected mainstream media coverage of all sorts of issues.

But it's fantasy to believe that journalists arrive in the newsroom in the morning, get their coffee and meet in a dark room where they pull the shades and map out a strategy to make up sources and fabricate news to hurt this or any president. It just doesn't happen that way.

At the risk of sounding like "Rebecca of Sunnybrook Farm," democracy works best when we trust our president -- and when we trust news reporters to keep an eye on government.