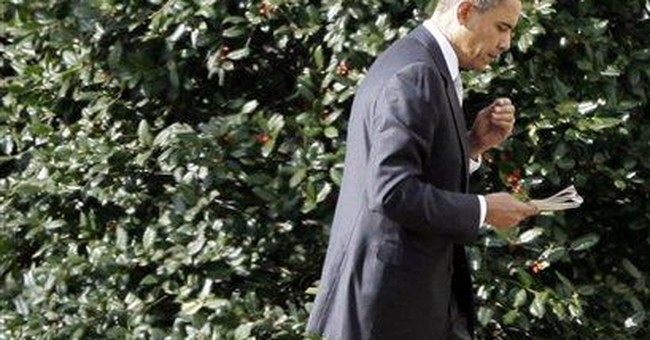 On Nov. 4, 2008, America bought into a grand vision. That vision promised a unified America, brought together by racial content, defined by renewed optimism and hewn together by pragmatic policymaking.

On Jan. 19, 2010, America started looking for the receipt. Turns out that the grand vision was a lemon, and we want a refund.

Democrats considered Ted Kennedy's old seat their seat by right. Republican Scott Brown rightfully declared it the "people's seat." The people have spoken, and to paraphrase President Obama, make no mistake: the election of Brown in Massachusetts was a complete and utter rejection of the Obama mystique.

Brown's election represented a sudden recognition of reality for the first time in well over a year: Massachusetts voters realized that our president is not who he said he was. Even traditionally liberal-leaning voters in Massachusetts saw through Obama. They saw that he is a race-baiter, not a racial unifier; that he is a socialist bent on total overhaul of the American way of life, not a simple administrative pragmatist; that he is a egotist and a neophyte, and a man who generally dislikes America's founding principles and prominent place in the world. And Massachusetts voters rejected the real Obama wholesale.

Let's start with the grand vision of racial unity. On Nov. 6, 2008, I wrote that Obama's main appeal was in his racial identity; as a black man who did not attack white folks on a regular basis, he was perceived by most Americans as a moderate who could offer racial reunification simply by his election. That appeal turned out to be a chimera -- Obama is as racially radical as Al Sharpton or Jesse Jackson. The revelation of that fact started in Massachusetts when Obama stated that the racist police in Cambridge, Mass., were victimizing black citizens. As Obama put it, "The Cambridge police acted stupidly … there's a long history in this country of African-Americans and Latinos being stopped by police disproportionately." So much for bringing us together to move beyond race.

Then there was the grand vision of pragmatism. Obama promised us better government. Instead, he has given us worse government and bigger government, a combination he embraces in order to pursue his redistributionist ends. The most egregious example of this ideological rigidity is his Orwellian "health care reform," which is truly a nationalizing scheme disguised as a way to enhance the free market. In some parts of the country, such newspeak works. In Massachusetts, it doesn't -- they've heard it before. Massachusetts' "universal" health care system is in shambles, with skyrocketing costs forcing health care rationing. Obama has said he wants to bring the Massachusetts system to the rest of the nation. This is hardcore Marxism on health care -- and Massachusetts voters already know the cost of such ideological commitment.

Finally, there was the grand vision of a "new American image" around the world. Even Massachusetts voters recognize how Obama's global kowtowing has undermined our national security. In fact, Coakley's campaign strategists released a memo to the media on the eve of her defeat. The memo stated, "Coakley's lead dropped significantly … after the Christmas Eve 'bombing' incident." That incident would only hurt Coakley if Americans considered her party leader -- Obama -- a wimp. Clearly, they did. Coakley's campaign staff also blamed hard-left Democrat primary voters for forcing Coakley to the left on Afghanistan, "which hurt her in the general." Apparently, even voters from Massachusetts don't appreciate dilly-dallying or surrender in Afghanistan, even to win a Nobel Peace Prize.

The evidence is in: Americans know Obama never meant to realize their grand vision, even if he preached it. Since Obama's election, there have been three statewide elections, two of them in deep blue states. Republicans have won all of them by stunning margins. Obama's response to the latest Massachusetts debacle is to double down on his own extremism, demonstrating his ardent belief that the opinions of the American people matter less than the dictates of his governing philosophy, his own grand vision. Republicans can only hope that Obama and his allies foolishly continue to pursue that grand vision at the expense of America's shattered hopes and dreams.