How to Beat Barack Obama 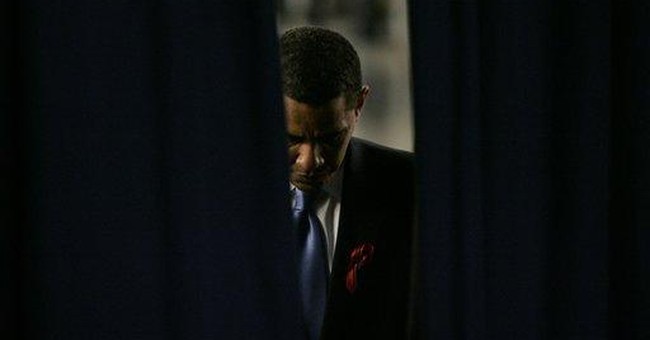 Conventional wisdom says the GOP is in trouble. Sen. Barack Obama, D-Ill. is the presumptive nominee for the Democratic Party; Sen. John McCain, R-Ariz. is the presumptive nominee for the Republican Party. Obama is young, black, tall and rhetorically polished; McCain is old, white, short and rhetorically mediocre. Obama is above the fray, a godlike figure spouting high ideals; McCain is quite human, a career politician talking business as usual. Obama thrills his base; McCain alienates much of his base.

There is no doubt that Obama has cultivated a messianic image. His base treats him like the Second Coming. Every time he speaks, his supporters faint in the aisles. Then he heals them with bottles of water.

McCain can't beat Obama by arguing experience. Obama's dramatic lack of credentials doesn't hurt him -- many Americans are so eager to elect an African-American president, they don't care whether the candidate is qualified. Obama's winning message is explicitly anti-experience; he's campaigning as an outsider. He's posing as something new and fresh, and being new and fresh automatically precludes being a seasoned veteran. Obama has run on his inexperience -- and he's crushed the Democrats' "experience" candidate, Hillary Clinton, like a bug.

How, then, can McCain tackle Obama? He can attack Obama's "change" message.

Master political strategist Karl Rove spoke to the American Jewish University this week. He stated that the key to attacking opponents isn't to attack their strengths -- it's to attack weaknesses they perceive as strengths. In 2004, Democratic nominee John Kerry staked his campaign on his perceived strength: his military experience. But, as Rove explained, that wasn't his strength -- he was vulnerable on foreign policy, a candidate with a record of attacking the military. By pointing out Kerry's weakness on the military, the Bush campaign was able to completely undercut Kerry.

Obama perceives his greatest strength to be his "change" message. He never shuts up about "change." His website touts his candidacy as "Change We Can Believe In." "We will change this country, and change the world," he states. His speeches are studded with the word "change." In his January 26 speech after the South Carolina primary, he used the word "change" 12 times. In his February 9 speech to Virginia's Jefferson-Jackson Dinner, he used it eight times. In his February 12 speech following the Potomac primaries, he used it 11 times. In his Wisconsin primary victory speech on February 19, he used it 33 times. For the love of God, somebody buy this man a thesaurus.

While Obama believes he can win the presidency simply by uttering the word "change" like a magical incantation, his "change" message has a soft underbelly. His focus on change means he despises this country the way it is. His wife, Michelle, is crystal clear on this. "Our souls are broken in this nation," she said this month at UCLA. "That is why I am here, because Barack Obama is the only person in this race who understands that. That before we can work on the problems, we have to fix our souls." She went further in a February 18 speech in Wisconsin: "For the first time in my adult lifetime, I am really proud of my country, and not just because Barack has done well, but because I think people are hungry for change."

Despite all of its problems, America is not a deeply flawed place. It is the greatest nation in the history of mankind. It allows Barack Obama to run for president; it allows his wife to attend Princeton University and Harvard Law School. The Obamas' constant emphasis on change carries the disturbing undertone that the country is a disaster requiring radical reform. This isn't a message of optimism -- it's a message of profound pessimism.

McCain can defeat Obama simply by pointing out the obvious connotations of Obama's "change" message. He can powerfully cite the fact that he was tortured for the best country on the face of the earth -- he's always been proud of his country.

And, McCain should say, his country deserves the pride of its citizens. Sure, some policies need change -- some policies always need change. But the soul of the country is intact. It doesn't need a soul-fixer. It needs a leader.