Barney Brenner
|
Posted: Nov 11, 2016 12:01 AM
Share   Tweet
The opinions expressed by columnists are their own and do not necessarily represent the views of Townhall.com. 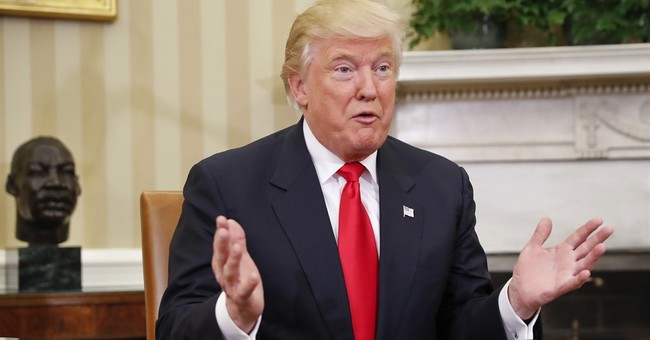 But coming off back-to-back presidential losses, it may be time for another tweak: vote for the one who unfailingly fights to win! By every measure, the only one who was on offense from start to finish was Donald Trump. Regardless of any perceived level of conservatism – or lack of it – The Donald was likely the only Republican who could have won. Period.

Just look at the electoral map. Who else would so many states have rallied to? And who else spoke of conservative issues like the rule of law in the inner cities, in effect standing up to the rioters and the Black Lives Matter thugs? Or stood so strongly for securing the border? Or gave it right back to the Leftist media? Only one of 17.

Many in the conservative camp stated that Trump was their last choice of those 17. The staunch ones made it clear that once nominated, they were with him 100%. In retrospect, I think many will admit that they’d be hard pressed to name another nominee who could have pulled off what Donald Trump has done.

Trump won by being emphatically unconventional and fighting like no Republican in recent memory has. With an alternative nominee in the mold of Dole, McCain or Romney, none of whom hammered away at the opposition with much consistency, who knows how many of the Clinton scandals would have seen daylight.

It’s long been said that nice guys finish last and there are few better examples than milquetoast Republicans.

Another area where we may end up more fortunate than expected is having a strong personality as our champion against the likes of Vladimir Putin. Who else might have been Putin's equal – or superior – in negotiations? Even George W. Bush handled Putin gently and proclaimed him a good man whose soul he could see, a pretty weak approach.

Regarding the Federal bureaucracy, what DC Republican could emerge from the inside and drain the swamp? Trump has no prior allegiance to the two million or so employees on the Federal payroll. Donald Trump gained some of his fame as a reality TV star on his show, The Apprentice. And what was Trump's famous line on the show? You're fired!

Republicans have long railed about the need to reduce the federal bureaucracy. But no one under 35 can remember ever seeing much reduction (save the military under Bill Clinton, one of the few true Federal responsibilities).

So how has establishment Republicanism been working for you? What real opposition has there been to our illegal (and even suicidal) immigration policies, one of Trump’s top campaign priorities? He may be just the man we need for such a time as this. God has used far more unlikely instruments to accomplish worthy goals, even dating back to Biblical days.

During the primaries, no one had a crystal ball. Perhaps most of us were looking for a conventional candidate in these most unconventional of times. The main goal all along was clearly to keep Clinton (each of them) out of the Oval Office. Mission now accomplished. We never get to know what would have been. But with some of our presidential candidate history, we cannot discount the possibility that someone else would have come up short.

Perhaps the WikiLeaks revelations would have come out in a timely fashion. Maybe the investigation into Anthony Weiner's computer would have surfaced before the election. Maybe our hypothetical alternative nominee would have made the most brilliant case for their election. But with none of that having happened in ’12, ’08 or ’96, we can now be thankful that the US of A, this unique experiment in Liberty, at least has another chance for some restoration.

We’re not yet down for the count. Let’s make the most of it!