Obama Has a "Boundaries" Problem 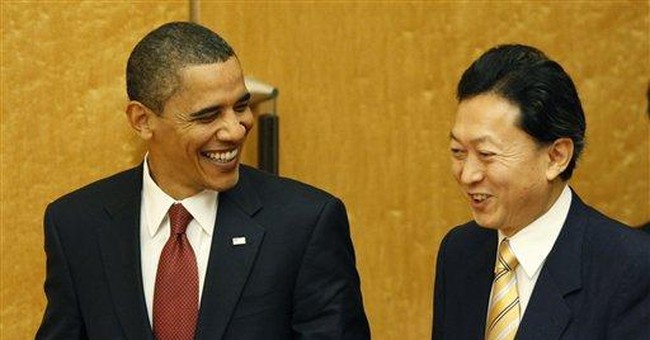 Does President Obama have “boundary” problems?

That’s a fair question, because of his apparent unwillingness – or perhaps it’s an inability – to confront the deadly threat posed by many self-described Muslims.

I say “many self-described Muslims,” because I’m not interested in debating who is a “real Muslim,” or whether or not “all Muslims” pose threats to civilized society. I simply want to pinpoint a serious problem facing our President, and our nation, and in so doing I am taking people at their word. There are self-described Muslims in our midst who want to destroy America, and the President should not pretend otherwise.

President George W. Bush repeatedly asserted that Muslims are “peace-loving” people, and President Obama has made this idea a central theme of his presidency. Yet Bush was also willing to confront what he called a “radical ideology with an unalterable objective, to enslave whole nations and intimidate the whole world” (those were Bush’s words, not mine), and it just so happens that this “radical ideology” emanates from people who identify themselves as Muslims. Call it “militant Islam,” call it “Islamo-fascism,” call it what you will – it is dangerous and deadly. And thus far, President Obama seems committed to ignoring it.

Borrowing a popular metaphor from the realm of family psychology, I have previously noted that Obama is ignoring the “elephant in the living room” – the obvious problem that is out in the open and that everybody can see, but nobody wants to acknowledge. Yet there may be more wisdom to glean from the world of psychology that can illuminate Obama’s dilemma, and this, in turn, may help enlighten us all.

But what does this have to do with “boundaries?” Well, “Boundaries: When To Say Yes, When To Say No, To Take Control Of Your Life,” is a wildly successful “self-help” book authored by Southern California-based Clinical Psychologists Dr. John Townsend and Dr. Henry Cloud. Originally published in 1992, it has been translated into multiple languages, and sold in excess of a million copies, and I suspect it might offer some insight for our President.

Drawing from the concept of boundaries within the physical world – “property lines” as the Doctor’s refer to – Townsend and Cloud explain how this concept applies to a proper understanding of the human individual: “Boundaries define us” the Doctors write. “They define what is me, and what is not me. A Boundary shows me where I end, and where someone else begins, leading me to a sense of ownership…”

So, beyond the fun and enjoyment of engaging in a bit of psychobabble, what does any of this have to do with our current President? Well, if we can apply the “boundaries” concept to the office that Barack Obama currently occupies, then we can say that Obama has responsibilities to the people of the United States of America. Whether or not he likes our nation and its heritage, his task is to defend America and its interests. And the interests of the entire world do not lie within Obama’s boundaries – in fact, sometimes the interests of the world are in conflict with the American interests that he must uphold.

Similarly, President Obama is not responsible for the entire Muslim world. He has spent considerable time and effort (and political capital) assuring the Muslim world that Americans are not their enemies, reiterating that American values and Muslim values are compatible, and treating Muslim terror suspects more nicely than his predecessor. Yet he is not deity, and he cannot simply speak things into existence. Similarly, it is not his job to convince the Muslim world to like us. His priority must be to fulfill his responsibilities to the United States, and to ensure that our collective national “boundaries” aren’t violated, and that our nation doesn’t get incinerated.

It’s interesting that the Psychologists Townsend and Cloud use an economic principle - the principle of private property ownership - to metaphorically illustrate a very basic and essential principle of human development. And for a President whose economic policies reflect a flagrant disrespect for private property rights, this concept of “personal boundaries” may seem foreign to Barack Obama.

But how much longer can America afford to wait, while President Obama figures out where his boundaries are?