Austin Bay
|
Posted: Jan 18, 2017 12:01 AM
Share   Tweet
The opinions expressed by columnists are their own and do not necessarily represent the views of Townhall.com. 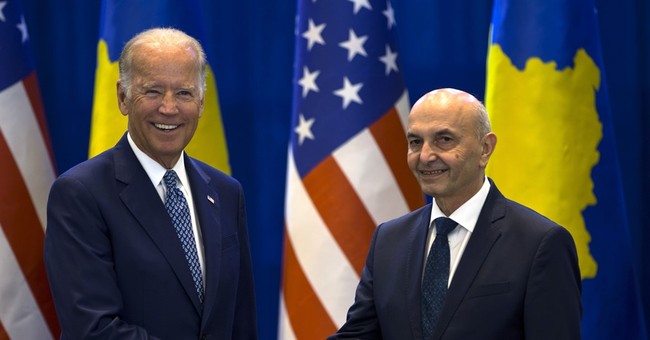 This week Kosovo accused Serbia of preparing to emulate "the Crimea model" and annex a predominantly ethnic Serb enclave within Kosovo.

The accusation reflected a surge of nationalist anger in both countries and stirred legitimate fear of rekindled war. "Crimea model" refers to the 2014 Russian invasion and annexation of Ukraine's Crimean peninsula -- the Russia led by President and former KGB colonel Vladimir Putin.

The Obama Administration responded to the Serbia-Kosovo tensions by asking their respective governments "to avoid dangerous rhetoric..."

Bill Clinton's Kosovo War isn't quite over. Eighteen years after NATO forces invaded Kosovo to protect Kosovar Albanians from Serbian militias, passions continue to simmer. A residual peacekeeping force, Kosovo Force, remains deployed as a "peace support operation." It does not have a lot of firepower.

Cynics may argue no Balkan war is ever over, and given Balkan history, the cynics have a case. However, Clinton sold the Kosovo War as a different Balkan war. NATO wasn't invading to change borders. NATO was intervening in Kosovo to protect civilians from Serbian dictator Slobodan Milosevic. His military forces were engaged in the "ethnic cleansing" of Albanians in Kosovo.

Milosevic was a genuine genocidaire. At his instigation, Serb militias had committed mass murder in Bosnia. Clinton wouldn't permit genocide in Kosovo.

Serbs saw the situation very differently. Serbs still regard Kosovo as the cradle of their civilization. Muslim Turks had taken Kosovo from Eastern Orthodox Serbs in 1389. Serbia finally recovered the province. Yugoslavia may have disintegrated, but Serbs weren't going to let predominantly-Muslim ethnic Albanians have Kosovo. Serbs saw the threat of "Greater Albania" behind the rebellion in Kosovo, at the expense of their vision of Greater Serbia.

Most Serbs didn't believe UN declarations that Kosovo's independence wasn't the first order goal. The Clinton Administration hedged and said that Kosovo's "final status" had yet to be determined.

In February 2008, Kosovo unilaterally declared independence from Serbia. Serbia acknowledges Kosovo's government exists but still considers Kosovo a Serbian province. Is it a hedge? Yes. Russia and China support Serbia. Both Serbia and Russia vow to defend the some 50,000 ethnic Serbs still living in Kosovo (most of them in northern Kosovo). Kosovar Albanians account for 90 percent of the country's 1.8 million population.

NATO-member Spain, fearing Catalan and Basque secession, supports the Serb position. So does Romania. On the other hand, 110 nations in the UN (including the U.S.) now recognize Kosovo's independence.

But the unilateral declaration of independence had quick consequences. In 2008, Russia invoked the "Kosovo precedent" as one reason it had the right to invade Georgia to protect ethnic Russians and other ethnic minorities.

The Bush Administration responded decisively by rapidly airlifting a Georgian infantry brigade from Iraq to Georgia. Russia's invasion fizzled. However, the Russian-supported "state-lets" of Abkhazia and South Ossetia still function as separate "polities" within Georgia.

The Kremlin's invasion of Crimea and subsequent annexation did not elicit a decisive U.S. and NATO response. Russia's decision to violate the 1994 Budapest Memorandum (guaranteeing Ukrainian territorial integrity) stunned the Obama Administration. Military aggression in Europe by a major European power led to political annexation and territorial expansion. The Kremlin got away with it.

Has the Crimean Precedent superseded the Kosovo Precedent? We may find out all too soon.