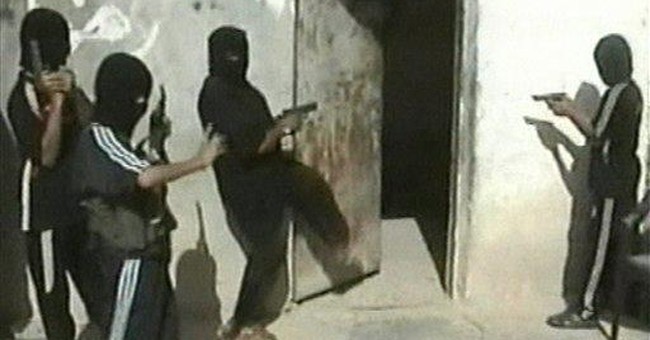 According to the Iraqi military, al-Qaida in Iraq's (AQI) twin terror atrocities had several particularly grisly twists: The radio-detonated high explosives were strapped to the waists of two women who may not have been aware of their mission to murder.

Amid the carnage of animal cages, animal carcasses and dead human beings, Iraqi police found the detached head of one of the bomb carriers. Al Bawaba, an Arab press service, quoted Baghdad police as saying the dead woman had "sold cream in the mornings at the market and was known to locals as 'the crazy lady.'"

Al Bawaba used a colloquial phrase to describe her. Other Iraqi and international media were less solicitous, describing both of the bomb-laden women as "mentally deficient" or lacking capacity.

Detectives drew a logical conclusion. The pet and bird market massacres were not committed by glory-driven jihadi martyrs slaughtering their way to Paradise, but by two poor souls calculatingly misled or seduced into committing a heinous crime. The women were double victims, first preyed upon by the terrorist schemer as the vehicle for murder and then unintentionally slaying themselves.

For the past year, we've heard rumors that AQI has had trouble recruiting murderers and penetrating increasingly effective Iraqi local security measures. Recently declassified intelligence, including captured terrorist diaries, appears to reinforce the rumors. Iraq's "Sunni awakening" has brought Sunni tribes into the democratic political process. That has left AQI demographically stranded -- without the protection of sectarian allies -- and thus more exposed to detection and destruction.

Perhaps an intelligence analyst would argue that using a neighborhood "crazy lady" to deliver a bomb is further evidence of AQI's declining operational capabilities -- i.e., at the moment AQI's emirs find macho, suicidal zealots seeking Paradise and 72 virgins to be in short supply.

That rather detached assessment wouldn't necessarily ignore the depravity of using these two particular women as involuntary kamikazes.

But what is the "news value" of added depravity? After all, al-Qaida has been committing mass murder for years. Overwhelmingly, al-Qaida attacks "soft targets" -- "soft" meaning unsuspecting civilians on trains (Madrid), in hotels (Jordan), in skyscrapers (New York) or in Iraqi neighborhoods.

Al-Qaida's method, reduced to a phrase, is blood for headlines, which is an old concept. Ninteenth century European anarchists exploited sensational magnification of hideous violence and used mass terror as a cruel marketing method.

The terrorist (of any type) frames his action as a tactic for achieving greater, inspired goals, either futuristic or apocalyptic. He frames his inspiration as political, cultural, religious, philosophical or tribal (think Rwanda or Bosnia). In doing so, he attracts the politically, culturally, religiously, philosophically or tribally sympathetic -- until time reveals his tactic for what it is: CRIME. Not the harbinger of the future or the omen of the end of this age, but despicable murder.

So here is the news value of dulled reactions to depravity, news more sorrowful and sobering than sensational: Al-Qaida's terrorists have not lost the ability to kill, but they have lost some of their ability to shock. Losing the sensationalist edge is a major blow for a terrorist organization and especially al-Qaida, which has always been foremost an information power. Al-Qaida's dark genius has been to connect the Muslim world's angry, humiliated and isolated young men with a utopian fantasy preaching the virtue of violence. That utopian fantasy sought to explain and then redress roughly 800 years of Muslim decline.

But in the process, they have killed indiscriminately and without regard to long-range consequences. Moreover, with Iraq and Afghanistan as the central battlefields, instead of New York or Madrid, al-Qaida's victims have been predominantly Muslim.

Arab Muslims have not missed that grisly bit of information.

And it is no longer news. It has, at least in Iraq, produced political and social revulsion.

In two columns I wrote last fall, I noted al-Qaida's "looming information warfare defeat" and mentioned reports from 2005 and 2006 that detailed the Iraqi people's rejection of al-Qaida as nothing more than a gang of criminals. I think in February 2008 that national rejection is apparent. That rejection could be the fragile foundation for securing al-Qaida's ultimate ideological defeat.