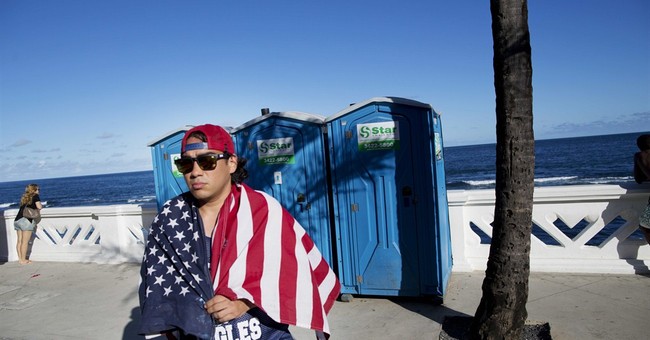 This past weekend, Americans located all over the country step out onto their patios, decks, and backyards, to partake in a delicious barbeque with family, friends, and loved ones. A drink or two was sure certainly spilled and chances are, kids fought over who gets to eat the biggest burger.

By the time the evening rolled around, families set up their chairs and picnic blankets as anticipation of the night’s display of fireworks continued to grow. Once the first cracks were heard, all eyes were fixed into the night sky until the anchor was complete.

Throughout the day you would have overheard talk of patriotism and what a sacrifice our veterans have made, but chances are you were too stuffed with food to listen or you were already taking an afternoon nap.

For most Americans, Independence Day is a lot like the beginning of a baseball game. A famous artist sings the National Anthem and everyone in the stadium stands and places their hand upon their heart. Some people sing along or at least mouth the words, but most put on a fake look of sincerity thinking, “I can’t wait till the song ends so the game can begin.”

Americans are very good at looking and sounding patriotic, but it’s fake. We put on face paint and wear ridiculous costumes for the world cup, but we fail to ponder the sacrifice made by past and present American military heroes.

We get more excited at the beginning of a sports game than when a soldier safely returns home to his wife and kids or when soldiers on a helicopter crash narrowly escape the jaws of death. We are more proud when the American soccer team scores a goal in overtime than when American soldiers successfully bring freedom to millions of people across the Atlantic.

Disagree with the last few years of American foreign policy all you want, but at the end of the day the individuals who put their lives on the line for our freedom deserve the upmost respect. We are quick to politicize American military operations, but slow to pray for our troops and support their dedication no matter what the circumstance.

The ongoing scandal at the Veterans Affairs office is disgraceful. The fact that thousands of American veterans are not receiving care or have waited over 90 days to receive care is shameful. Whatever political party you identify with doesn’t matter. All Americans should be outraged over the corruption and scandal and disrespect shown to those soldiers we owe our lives to.

Two years ago, Army Sgt. Brendan Marrocco successfully underwent double arm transplant surgery. He lost both of his arms back in 2009 from a bomb explosion in Iraq. Marrocco’sability to even squeeze and throw a tennis ball is a miracle. He deserves our thanks and praise.

In 2010, Lance Cpl. William "Kyle" Carpenter heroically saved a fellow soldier after the two of them came under heavy fire on a rooftop in Afghanistan. Kyle dove on a live grenade losing his eye and sustaining serious injuries, but saving the life of hisfriend. This is what true love and courage look like.

Our troops demonstrate their willingness to lay down their lives for a friend each and every day they’re on the battlefield.

Think about the courage of the American soldiers who knowingly crawled up a French beach filled with bullets on June 6, 1944 to save a continent from tyranny. Or those outnumbered American soldiers in South Vietnam who fended off attack after attack from the enemy for over three days in the valley of IaDrang.

One trip to the Arlington National Cemetery in Virginia will open your eyes to the costly sacrifices made to secure our freedom. Watching the tears fall from the eyes of one broken family is enough to break your heart.

In an interview after receiving the Medal of Honor, Kyle said, “I receive it with a heavy heart. It’s a huge honor and I’m very appreciative and I'm very humbled by it, but at the same time there is - not just from Iraq and Afghanistan, but previous wars since this country was founded - there have been those who didn’t make it back and those who did make it back and had worse injuries than mine. Courageous things happen on the battlefield every day and all of us raise our right hand in the exact same way to serve our country.”

The heroism of Marrocco and Kyle and so many others shouldfill us with a sense of deep gratitude. This weekend say a prayer for our troops. Care for those veterans who live in your community and care for those broken families who have given everything to secure your freedom.

If you see a veteran in the local grocery store don’t let him pass by. Stop for a moment and say thank you. It’s not enough to sing a song before a baseball game. True patriotism is lived out in daily life. It’s time all Americans start living it out.