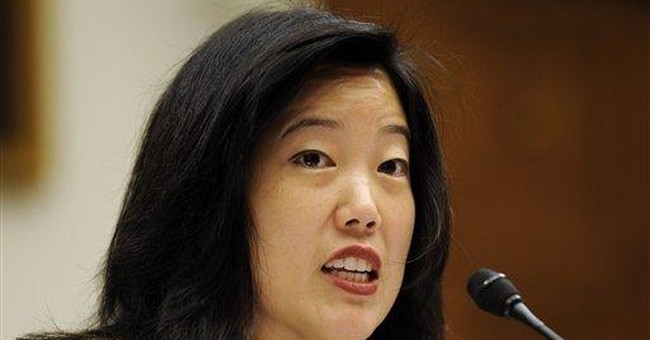 These are interesting times for education reform in America today. A lot of politicians on both sides of the aisle are calling for "reform," but no one seems to know what "reform" really looks like.

The issue reached new levels of salience just a few weeks ago when "Waiting for Superman" - the new Davis Guggenheim documentary following five students and their futures in charter schools - opened to nationwide critical acclaim.

There's no question this country must have a serious debate on what reform is needed in our education system. According to the Organization for Economic Cooperation and Development (OECD), U.S. students in 10th grade rank 28th in math and 22nd in science out of a total of 39 countries in proficiency.

Once the hotbed of innovation, medical and technical advancements, America is now sucking the exhaust fumes of revving machines such as India, China and other advancing nations. We are beyond arrested development. We are regressing. It's one thing to grasp this reality. It's quite another to do something about it.

That's why the departure of D.C. Schools Chancellor Michelle Rhee in the wake of a new mayor in our nation's capital is such a major loss, both for the reform movement and the District's future.

Following the primary loss of D.C. Mayor Adrian Fenty, it was fairly evident that Miss Rhee's head would be first in line on the chopping block. Her reform initiatives aggressively pushed overhaul over the status quo, which upset many in the education community. She was moving too fast for them to keep up, and certainly too quickly for them to cut her off.

For too long, education "elites" have repeatedly bashed pioneers such as Miss Rhee for their views.

When asked why they oppose them, teachers unions can't nakedly admit, "Because it disrupts the status quo[...]" or "It undermines our power."

So instead, they proffer phrases that sound more benign and well-meaning. "We welcome proposals for reform," they numbly chant, "but only if they are inclusive of our ideas."

Read another way, that means if the unions aren't at the table with their thumb on the scale to guarantee outcomes, there ain't no way reform is gonna happen.

It's almost mafia-like in the school systems in the District and other struggling big cities. If you try to do things differently, Rocko and Paulie pay a visit to help you get back in line. Sadly, Michelle Rhee was politically gunned down by her opponents for standing up and saying we ought to look for a better way of teaching kids in the District.

In many respects, education policy is a backward-thinking topic in government circles today. At a time when public institutions are struggling to make ends meet and squeezing even more productivity from every resource, policymakers seem all too eager to simply throw more money at an issue that has clearly shown cash isn't the magic cure-all for advancing education excellence.

According to the Heritage Foundation, federal, state and local education spending combined exceeds $580 billion annually, roughly 4.2 percent of our nation's gross domestic product. Yet while inflation-adjusted per-pupil spending has more than doubled since 1970 (more than $10,000 per student per year), academic achievement has stagnated while graduation rates have flat-lined.

Michelle Rhee understands that truism. Hers is a philosophy that will be a model, not a martyr, for education in the years and decades to come.

For it's only a matter of time when the silent majority of parents and community leaders rise up and start asking the critical question of the education establishment, "Is that all I'm getting for my tax dollar [...] a child who struggles to read at a 5th grade level when they're about to graduate from high school?"

Yes, parents play a role, and we'll discuss that in another column at a later time. But for this moment in time, Miss Rhee deserves her moment in the sun - one that will mark the latest evolution of education policy in the United States.

The Obama administration understands what Miss Rhee was trying to do. Just ask the president's education secretary, Arne Duncan, who favored linking teacher evaluations to student test scores, dismissing under-performing educators in favor of teachers who were as excited as the student they taught to be in the classroom and shared the joy, and glory, of watching a child learn.

Let's be clear, Miss Rhee's efforts on behalf of education weren't isolated to that profession alone. Now more than ever, a solid education means a lifetime of solid work. Not just a job, but a career. Our future economic recovery depends on the young minds our teachers educate every day.

Further, our continued dominance as the world's only economic superpower hinges on that same foundation. If we are not properly educating the next Bill Gates or Steve Jobs so they can create the next software innovations or next iPad, the Chinese are all too eager to fill that void.

As she gave her final public address as chancellor recently, Miss Rhee told reporters her future remained unclear. What is clear, however, is a reform-minded legacy the District would do well to keep in place long after her departure. The rest of the country knows it needs to head in that direction. It would be nice for the District to actually lead in something, for a change.