How Does One Spell Government Bankruptcy? O-B-A-M-A 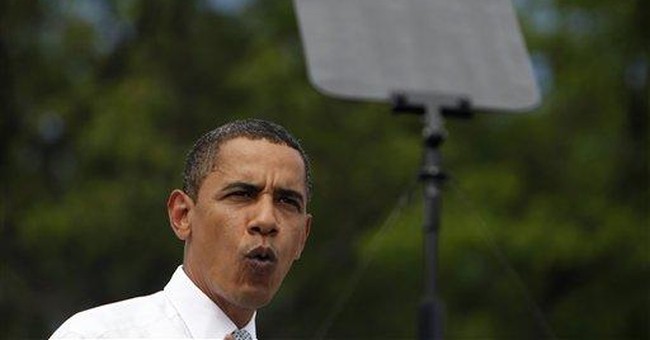 If any chief executive officer in the United States of America presented his board with a budget that was one-third unfunded, he would be fired and tossed out of the boardroom immediately.

President Obama recently revealed a $3.8 trillion budget for FY2011 that has a $1.3 trillion deficit. This budget short fall represents $4,000 for every man, woman and child in America. It is equivalent to a business CEO presenting his board of directors with a financial plan to have a 34 percent loss. This is on top of a $1.6 trillion deficit in FY2010 which is equivalent to a 40 percent business loss.

No bank in the world would finance a business with the losses (i.e. deficits that the U.S. government has had over the past few years.) The bankers would send the business executives back to the drawing board to restructure the company. This would include cutting personnel, reducing compensation and benefits, restraining travel and cutting commitments for services and capital expenses.

If the business executives could not eliminate the loss, the company would go into bankruptcy for the court to restructure or liquidate.

Unfortunately for our children and grandchildren, the U.S. government has another way to finance its losses. It transfers the payment of these losses to future generations of taxpayers by increasing the national debt. This deficit will increase the national debt to $15.7 trillion or 101 percent of the gross domestic product, or GDP. This is equivalent to $47,000 of debt for every American!

Mortgaging the future of American taxpayers should not be an acceptable option to the American people.

Our president has made anemic gestures to reduce spending in his budget in certain non-discretionary areas. However, these symbolic gestures take place after this fiscal year. If Mr. Obama truly and sincerely wishes to reduce the deficit, he must take similar actions that everyday U.S. corporations implement when confronted with huge losses.

Unfortunately, companies reduce their losses by cutting their workforce, reducing levels of employee compensation and eliminating all unnecessary spending to meet the shortfall. The U.S government, on the other hand, continues to increase its workforce in this great recession and is promoting and increasing the salaries of all government employees. It also has increased spending on new programs.

Only to exacerbate the issue, there have been no major discussions to reengineer government employee retirement plans. Major companies in the auto industry have seen how difficult it can be to pay frightfully enormous pension plans over the years; and, how quickly this can monstrously grow into an uncontrollable financial burden.

However, luckily for our national government, it doesn't have to face stock owners and board of directors who would like to see the government grow, be prosperous and competitive. Rather, these retirement benefits for government employees fly well under the public radar. Plus, their pensions will always be safe as unassuming tax payers are continually cajoled by power hungry politicians to uphold this lush retirement system. This is insane when our government continues to have this catastrophic deficit. This insanity is clearly a reflection on the extraordinary power public-sector unions have on the Democratic Party. What this does, without question, is transfer wealth from the productive private sector to the unproductive public sector.

Wouldn't it be great if the public sector was to be held accountable to the public? Wouldn't it be nice if it had to answer to its investors –the tax payers? Various arms of the government would have to become more efficient in their hiring, training, the products and or services in which they produce. They would be forced to have balanced budgets; and, the only bureaucracy would hold the dollar as king. Well, maybe only in a perfect world.

The deficit is driven not only by outrageous increases in labor costs, but by inextricably increasing entitlement costs. Unless this government faces the grim reality, these entitlement costs will soon drive our nation to severe bankruptcy. A bankruptcy from which our children and grandchildren will never recover.

The problem is that most Americans can't fathom the grim realities of what it's like for a country to go bankrupt, or for a currency to completely crash. I am sure those who have close relatives who lived through the Great Depression may have a little bit more perspective. They have seen their frugal ways. How they pay attention to everything they spend. How they keep a watchful eye on the way the markets are turning. The ruling generation appears to be far detached from a mindset that can thrive even in the harshest of conditions.

All one really has to do is look at Buenos Aires[NOTE], Argentina [\NOTE]–once one of the richest cities to live, on par with New York City and Paris. However, after going through a couple of decades of irresponsible state leaders, war and probably most controversial, a forced alien economic system, the country, although it claims to have recovered, really hasn't.

Now, Buenos Aires has become one of the cheapest travel destinations in the world. And things won't change for quite some time. The people of Argentina have little to no upward mobility when it comes to class. They are either poor, middle-class or rich.

It is one of the few countries where you will find highly educated people with jobs that Americans associate with the rich are stuck in the middle-class. Worse yet, the Argentinian government adopted protectionist policies to protect its native uncompetitive industries.

This shouldn't be the future of America. We as a people need to protect the value of our currency. We need to protect our markets and keep them competitive over the long hull. We have a right to stand up when something doesn't sound economically feasible. There is an eminent threat that can, and will destroy our country.

Americans must remember that other countries want to have the position of being a global hegemonic force. They want to have all of the world's talent and resources filtered directly into their country.

Americans should look back on the Keynesian economic - a mixture of socialism and capitalism - policies of Franklin Delano Roosevelt.

Don't be afraid to remember that many of his socially radical policies were later shamefully revoked and some rightfully deemed unconstitutional. Instead of bowing down to an ideological economic approach, such as the Keynesian approach - which favors government spending to recover what is lost on the consumer and business side of the GDP equation - maybe the government should focus on doing what is fiscally responsible.

The great people of America want to see economic decisions that reflect empirical evidence –it should be convincing. If not, I am afraid that the honest hardworking people of America will spell economic doom and government bankruptcy for the once-greatest economic engine known to humankind around the globe as: "O-B-A-M-A."