As Long as Obama Brought Up the Cost of College... 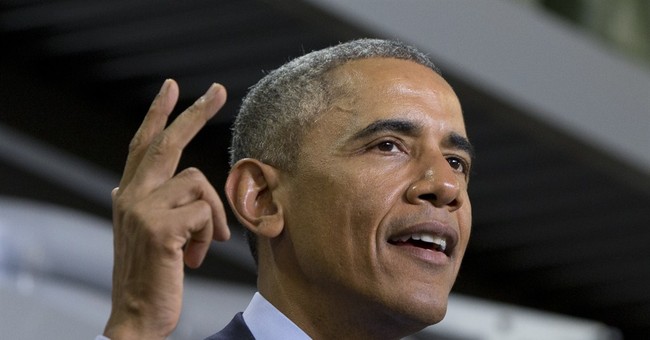 I gather from Obama's "free" community college proposal that his plan for dealing with the Republican Congress over the next two years is to throw out ridiculously expensive ideas no one has ever heard of before, and then denounce Republicans for being naysayers.

Community college is already incredibly inexpensive. The only thing that will jack up the price is making it "free." How about a big federal program to provide every American with free toilet paper? Coincidentally, that's about all most college degrees are good for these days.

Obama's moronic proposal has presented the GOP with a fantastic opportunity. Since he brought it up, how about Republicans get to the bottom of why college is so expensive?

The cost of a college education has increased by more than 1,000 percent only since 1978. Nothing else has gone up that much -- not health care, consumer goods or home prices. The explosion in college tuition bears no relation to anything happening in the economy.

Would anyone argue that colleges are providing a better education today than in 1978? I promise you: People coming out of college in the '50s knew more than any recent Yale graduate -- unless we're only counting knowledge of sexual practices once considered verboten.

They're teaching gender studies, ethnic studies, moral equivalence and hatred of America. Did the Japanese Really Start World War II or Did We? It's worse than not reading Shakespeare. They're reading Shakespeare for homosexual imagery. As Yale professor Daniel Gelernter says, colleges are "threatening to become an elaborate, extremely expensive practical joke."

The fact that 80 percent of Weathermen -- the violent '60s radicals -- are full college professors tells you all you need to know about the state of higher education today.

The cost of college spirals continuously upward not because the product has gotten better -- it's gotten much, much worse -- but because college loans are backed by the taxpayer.

The government is chasing its tail every time it increases student financial aid. If the government hiked college loans and subsidies by $1 million per student, colleges would promptly raise tuition to: [current tuition] plus $1 million.

Americans are being bamboozled into paying any price for a college degree because they are relentlessly told that if they don't go to college, their lives will be hell. And they're told this not only by the colleges, but by the government.

The sales pitch is manifestly false. According to an article by Adam Davidson in The New York Times magazine last June,

"(m)ore than half of recent college graduates are unemployed or underemployed, meaning they make substandard wages in jobs that don't require a college degree." Evidently, most jobs don't depend on a degree in women's studies.

More than a third of college graduates, Davidson says, will never make enough money to repay their student loans.

If any other business made such false claims about a product, there would be massive congressional hearings, media denunciations and prison sentences for the CEOs. A college degree is the most expensive purchase most families will ever make, other than their home.

Right before our eyes, Democrats are colluding with colleges to create a market bubble for an increasingly worthless product, and they're doing it by making the exact same promise that banks made about home mortgages before the housing market crash: Sure it's a lot, but it's an investment in your future!

Instead of hauling college administrators to court, Democrats are active participants in the fraud, acting as Big Education's carnival barkers. It's as if the government is telling people: "If you don't smoke, you'll never be cool."

Why is the left not willing to admit that education is an industry, just like Lockheed Martin, Enron or Philip Morris? Democrats love to rail about the high costs of everything else -- pharmaceuticals, health care, mortgages, missile systems, contraception and so on. College is a business, too -- a cartel that fixes prices, preys on teenagers and lies to consumers.

But liberals won't make a peep about the College Industrial Complex because college professors are brainwashing students into leftist politics. Every year, another 10 million graduates emerge, hating God, their parents, America and Republicans. For this, parents are spending $50,000 a year.

The education industry is how leftists make capitalists pay for socialism. It was a smart move for cultural Marxists to capture the country's education establishment. GOOD THINKING, CULTURAL MARXISTS!

It's not the fault of the students that they're getting a crappy product at inflated prices. They've been lied to by shady education peddlers, including the Democratic Party.

Let's see if the middle class is more interested in the cost of college tuition or the Democrats' endless global warming initiatives.