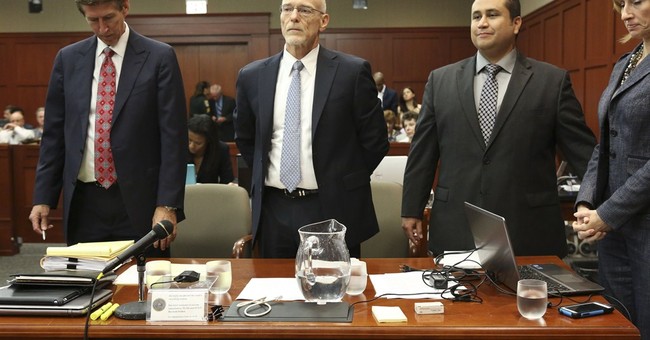 This week, instead of attacking a Hispanic senator, Marco Rubio, I will defend a Hispanic citizen, George Zimmerman, on trial for the murder of Trayvon Martin. (Zimmerman would make a better senator.)

It's becoming painfully obvious why no charges were brought against Zimmerman in this case -- until Al Sharpton got involved. All the eyewitness accounts, testimony, ballistics and forensics keep backing up Zimmerman. We should send a big, fat bill for the whole thing to Sharpton, courtesy of MSNBC.

With the prosecution's witnesses making the defense's case, the inquisitors' last stand is to claim that, if the races were reversed, the black guy would have been instantly charged with murder. As explained in The New York Times:

"Had Mr. Martin shot and killed Mr. Zimmerman under similar circumstances, black leaders say, the case would have barreled down a different path: Mr. Martin would have been quickly arrested by the Sanford Police Department and charged in the killing, without the benefit of the doubt." (Also, CNN could have dropped the "white" and referred to Zimmerman exclusively as "Hispanic.")

The people who say this are counting on the rest of us being too polite to mention that it is nearly impossible to imagine such a case in a world where half of all murders and a majority of robberies are committed by blacks. To reverse the races with the same set of facts, first, we're going to need a gated, mixed-race community, similar to the Retreat at Twin Lakes, that has recently experienced a rash of robberies by white guys. The only way to do that is to enter "The Twilight Zone."

There were at least eight burglaries in the 14 months before Zimmerman's encounter with Martin. Numerous media accounts admit that "most" of these were committed by black males. I'm waiting to hear about a single crime at Twin Lakes that was not committed by a black male.

Just six months before Zimmerman's encounter with Martin, two men had broken into the home of a neighbor, Olivia Bertalan, while she was alone with her infant son. She had just enough time to call 911 before running upstairs and locking herself in a room. The burglars knew she was home, but proceeded to rob the place anyway, even trying to enter the locked room where she held her crying child.

Bertalan had seen the burglars just before they broke into her house -- one at the front door and one at the back. They were young black males. They lived in the Retreat by Twin Lakes.

In another case, a black teenager strode up to Zimmerman's house and, in broad daylight, stole a bicycle off the front porch. The bike was never recovered.

Weeks before Zimmerman saw Martin, he witnessed another young black male peering into the window of a neighbor's house. He called the cops, but by the time they arrived, the suspect was gone.

A few days later, another house was burglarized. The thieves made off with jewelry and a new laptop. Roofers working across the street had seen two black teenagers near the house at the time of the robbery. When they spotted one of the teens the next day, they called the police.

This time, the roofers followed the suspect so he wouldn't get away. The cops arrived and found the stolen laptop in his backpack. This was the same black teenager Zimmerman had seen looking in a neighbor's window.

There is, however, at least one case of a black homeowner fatally shooting a white troublemaker. He was not charged with murder.

In 2006, the ironically named John White was sound asleep at his nice Long Island home when his teenage son woke him to say there was a mob of white kids shouting epithets in front of the house. The family was in no imminent danger. They could have called 911 and remained safely behind locked doors.

But White grabbed a loaded Beretta and headed out to the end of the driveway to confront the mob. A scuffle ensued and White ended up shooting one of the kids in the face, killing him.

White was charged and convicted only of illegal weapons possession -- this was New York, after all -- and involuntary manslaughter. He was sentenced to 20 months-to-four years in prison, but after serving five months was pardoned by Gov. David Paterson.

With all due compassion for the kid who was killed, the public was overwhelmingly on the father's side -- a fact still evident in Internet postings about the case. The kids were punks menacing a law-abiding homeowner. Even the prosecutor complained only that Paterson hadn't called the victim's family first. The local NAACP had campaigned aggressively on White's behalf. There were no threats to riot in case of an acquittal.

The centerpiece of White's self-defense argument was his recollection of his grandfather's stories about the Ku Klux Klan. George Zimmerman's memory of young black males committing crimes at Twin Lakes is somewhat more recent.

John White wasn't jumped, knocked to the ground, repeatedly punched, and his skull knocked against the ground. He wasn't even touched, though he claimed the white teen was lunging at him. Talk about no reason to "follow," there was no reason for him to leave the safety of his locked home. White's son knew the kids by name. They could have waited for the cops.

So, yes, this case probably would be very different if Zimmerman and Martin's races were reversed. It is only when the victim is black that we must have a show trial, a million-dollar reward paid to the victim's parents and the threat of riots.