Andrew Quinlan
|
Posted: Jul 02, 2018 11:28 AM
Share   Tweet
The opinions expressed by columnists are their own and do not necessarily represent the views of Townhall.com. 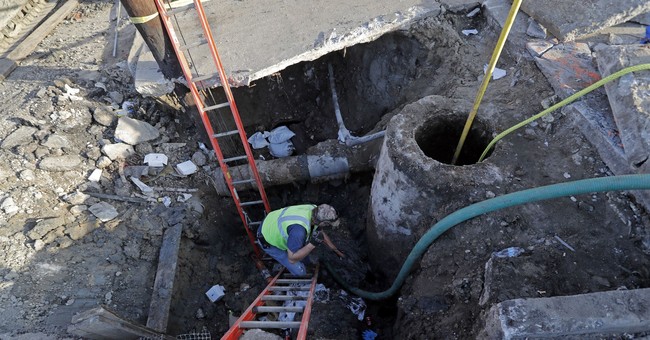 Getting anything done legislatively during an election year is difficult. That’s especially true in the current political environment, now compounded by the coming fight over filling the Supreme Court vacancy left by Justice Kennedy’s retirement. Yet there remains opportunity for legislative victories, even bipartisan ones, as evidenced by a recent initiative offering to pay for infrastructure by selling certain government assets.

The Generating American Income and Infrastructure Now (GAIIN) Act takes the approach of aligning the interests of both parties and several ideological factions. The result is legislation that not only offers potential wins for interests as varied as the Republican Study Committee, Congressional Black Caucus, and House Freedom Caucus, all of which feature a member as sponsor, but more importantly, for taxpayers.

It works like this: The Agriculture Department would sell its distressed loan debt, worth over $50 billion, through public auctions. Borrowers would be given 30-days’ notice of any sale and the opportunity to refinance at the potential sale price. Those loans that remain outstanding would then be sold for servicing in the private market.

Half of the proceeds would go to pay down the federal debt. The other half would be used to fund infrastructure programs in the nation’s poorest communities.

Free market advocates are often skeptical of government spending on infrastructure, and for good reason. Federal infrastructure spending has a mixed record, with promises often outstripping results, due to its vulnerability to cronyism and the tendency of politics to drive spending decisions instead of economics. So, it’s possible that the economic benefits of GAIIN Act spending will prove to be overstated. It will depend heavily on what projects are undertaken and how they are chosen.

On the more optimistic side, the spending would be concentrated in the 100 poorest congressional districts. If there are pro-growth infrastructure projects to be found, it stands to reason that they are more likely to be located where infrastructure is most neglected.

It’s also important to consider the political environment. President Trump campaigned on $1 trillion in new infrastructure spending and should Democrats win control of either chamber of Congress in November, a big infrastructure spending package is likely to prove a tempting area of common ground with the White House. But if some or all of Trump’s desired infrastructure package can be financed by selling government assets, it keeps taxpayers off the hook.

So even for those skeptical of federal spending, or who cringe at anything that sounds like “shovel ready” stimulus, the key point is this: without the political support that comes with the infrastructure programs, any effort to sell distressed assets and pay down the federal debt would never get off the ground. For fiscal conservatives, it’s either half the pot or none of it.

The good news is that GAIIN would just be a trial run. If all goes well, the program could expand beyond the USDA and as much as $2 trillion could eventually be available for new projects and national debt payments.

Given the sorry state of the nation’s finances, what have we got to lose?