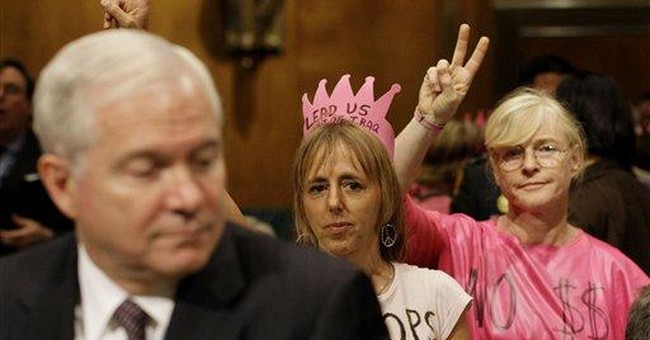 “It’s rare for a head of state to take time during an official U.N. visit to meet with the peace community, especially in a situation where the host government—represented by the Bush administration—is so hostile,” Evans said in a statement. “The fact that the meeting took place and was so positive is, in itself, a major step forward.”

During the Democratic primary Obama came under fire from both his Democratic and Republican foes for promising to meet with Ahmadinejad “without preconditions” if he became president.

At the meeting Evans and fellow Code Pink founder Medea Benjamin offered Ahmadinejad a plan to build a “peace park” in Tehran and invest funds in Iranian businesses “that produce green and sustainable products, such as bicycles.”

Evans signed on to become a “bundler” for Obama’s presidential campaign last June. As a bundler, she has pledged to raise at least $50,000 for his campaign.

150 other “peace group representatives” also attended the event which was held at New York’s Grand Hyatt Hotel. Ahmahdinejad was in the city to address the United Nations.

He also appeared on Larry King Live during his visit.