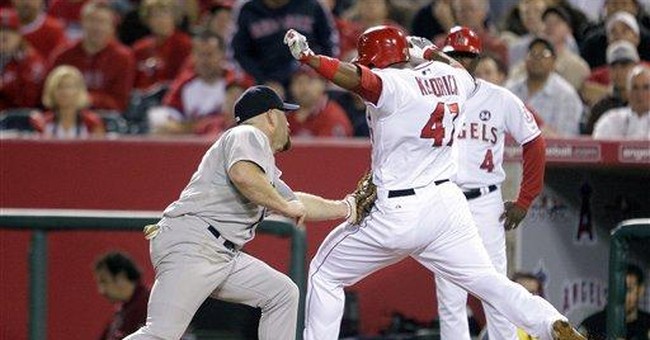 C.B. Bucknor will not be working the World Series. Scheduled to work his first World Series as a major league umpire, Bucknor blew two calls in Game 1 of the American League Division Series. His poor performance, coupled with a number of embarrassing umpiring gaffes in this year's baseball playoffs caused the baseball powers-that-be to realign their umpire schedules for this week's Fall Classic. First-time umpires are out; seasoned veterans are in.

As frustrating as the umpires' calls have been to players and fans, just imagine the chaos that would ensure if the men in blue began visiting the mound between pitches to offer advice on pitch selection. Or if the umpires began meeting with managers before and during the game to dictate who the right-fielder should be in. Or if the umpires union met with the General Manager of each team to help set salaries for players based on their opinions as umpires. Everyone would ask: are the umpires officiating the rules or are they playing the game? Who is making what decisions and how? How does an umpire both officiate and play?

Someone needs to ask these same questions of the Obama administration when it comes to the activities of the Pay Czar, Kenneth Feinberg. Capitalism needs rules to be sure, but it is important to remember that capitalism functions best when the players play the game, and the umpires referee it. When the umpires begin to put their toe into the game, confusion reigns. Excessive government tinkering threatens to inhibit capitalism's ability to do what it does best:to create wealth and to lift the poor out of poverty.

Confusion reigns when players and managers are not sure of what the rules are anymore. They no longer understand their roles. Exactly what are the umpires doing, and what can a player or manager in the game do? Financial industry executives are left in this quandary right now. First, Washington bails out struggling financial players. Then, Washington does not clearly articulate what the expectations of that bailout will be, leaving the details for later in the urgency of “saving Wall Street and the economy.” Months later, the details emerge, the compensation at bailed-out companies is reduced, even capped, and leaders are left wondering what, if any, role they can or will play in the future of the companies they lead.

Already, executives are fleeing the tinkering hands of Big Government. At Bank of America, just 14 of 25 of the affected executives still remain. At AIG, only 13 of 25. By all accounts, morale is abysmal in both organizations. Worst of all, more details still remain to be revealed as Feinberg has yet more employee compensation rulings to issue, not the least of which is the ultra-sensitive issue of nearly $200 million in bonuses due in March to employees at AIG Financial Products. Confusion reigns, dismay abounds, and leadership is left with little but questions.

Tentative leaders are poor leaders. Leaders who do not understand the rules of the game, since the rules are being written even as the game is being played, cannot lead. Debate the right and wrong of the initial bailout all you want, but it is a reality now. The past cannot be changed. We can only deal with the present and the future. The public now has a large stake in a number of large financial institutions, and the public's interest is for their money to be repaid as quickly as possible. Disabling leaders in the indebted institutions hardly serves that public interest.

Worse still, by restricting pay, and by setting the precedent for Washingtonian micro-management, the government's actions decrease these banks' abilities to attract competitive talent in the future. Many leaders have already left. Will effective new ones be attracted by a restricted pay scale and a meddling Pay Czar? No. When an effective leader can take a job across the street for three times the pay, and without the meddling tinkering of Washington, why would he or she be motivated to work for AIG, Bank of America, or CitiGroup?

In my two decades as a pastor, I learned that some of the most expensive gifts I or the church received were the free ones. Whether the ultimate cost came as a result of the unstated expectations of the donor or from the unforeseen poor quality that was discovered later, it became clear that things that are offered as free usually end up costing you the most in the end. Free is rarely free. That may well be the case here. It is more than ironic that Feinberg's “working” for free as Pay Czar for the nation may indeed cost us a large portion of the bailout funds themselves as effective leaders abandon the enterprise and the bailed-out entities slowly disappear into never-never land. Feinberg is doing us no favor. He is performing no public service. Once more, we learn the old lesson that when you let the devil ride, pretty soon he wants to drive.

Business ventures rise and fall based on strong leadership. Effective, motivated leaders make the difference in success far more often than does the business idea itself or the glitz of the marketing package. By de-motivating leaders at a crucial time in these entities' lives and fights for survival, the federal government (or perhaps merely Mr. Feinberg since he has yet to speak with the White House at all) is putting into place the road to failure rather than the road to re-payment.

All in all, what we are learning (or re-learning for those of us who have known it all along) is that the more the government tinkers in private business the worse the results. Very simply, Washington wants the fruit of the harvest without the tree or the farmer who produced the fruit in the first place. In doing so, they will remove the farmers who know how to produce the harvest, and they will thereby eventually kill the tree that produces the very fruit Washington desires to eat.

From farming back to baseball. Umpires officiate. Players play. When the two roles get confused or conflated, only bad things can result. And taxpayers will be left holding the bag in the end. Again.