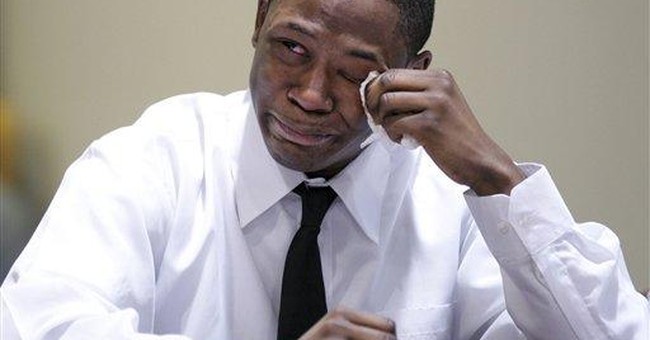 At age eleven, in 1975, I sat in a classroom or on a ball field. At the same age today, Jordan Brown sits in a jail cell. Charged an an adult with criminal homicide by the state of Pennsylvania.

Last week, it appears that Jordan tragically shot and killed his father's pregnant live-in girlfriend, Kenzie Marie Houk, while she slept. Houk leaves behind two daughters from a previous relationship. Today, Jordan is dazed and bewildered in the aftermath of this horrific tragedy. Police say he used a 20 gauge shotgun to murder Houk and her unborn child.

After the murder, Jordan got on a school bus with one of Houk's daughters and promptly went to school. Today, he simply wants to be able to go home. Instead, he sits alone in an adult jail, separated from the rest of the incarcerated adults for his own protection. The law requires juveniles charged as adults to be housed in adult facilities. The jail warden says, "I think even for an adult, for the first time, it's probably a frightening experience." Jordan Brown is 11 years old. Until last week, he was in fifth grade.

Lawrence County District Attorney, John Bongivengo, believes the murder was premeditated, so he has chosen to charge Jordan as an adult. In Pennsylvania, a juvenile cannot be charged with criminal homicide; only adults can. Consequently, Pennsylvania leads the United States in juveniles serving life sentences, with 444. Pennsylvania “lifers,” who committed their crimes as juveniles and are now serving life sentences, account for 20% of all such inmates in the country. Jordan may well be number 445. And that is wrong.

Bongivengo rightly wants to bring justice in this case. It is, after all, a heinous crime. What Bongivengo lacks is prudence.

Aquinas wrote that prudence is “love choosing wisely between what is helpful and what is harmful.” Charging an 11-year old boy as an adult can hardly be classified as helpful.

Did Jordan behave like an adult in murdering Kenzie Marie Houk? Probably so.

Is any 11-year old boy capable of thinking, reasoning, or making decisions like an adult? Absolutely not.

Does Jordan's unhealthy development excuse murder? Of course not. Does it help explain why the murder happened? Absolutely. It simply reminds us that he is an 11-year old boy, not an adult. An 11-year old boy still does not even have the capacity to create hypothetical situations and judge their outcomes. A male brain does not reach full development until well past the age of 21. Jordan is not a “little adult;” he is a developing young man. He needs help, not a lifetime of incarceration with no chance to recover from this catastrophic decision.

Bongivengo wants Jordan to have no chance at freedom ever again. The juvenile system requires release by the age of 21, and Bongivengo does not want to take the chance that Jordan might be released and murder again. So he is treating Jordan like an adult.

Bongivengo wants those ten years to be spent as the first installment on a life in prison. Prudence would suggest that those ten years might be better used offering hope, help, and healing to Jordan Brown, and those affected by his tragic choice. Human beings do have the capacity for change. For 11-year olds, change occurs every single day.

Sadly, for whatever reason, Jordan Brown chose to play for keeps before he was mature enough to know what that meant. We do not know the reasons, and we may never know them in full. After all, he is 11-years old. Because of that, we should treat him as what he is, a boy. A boy with the brain, thought processes, emotions, judgment, and decision-making abilities of an 11-year old.

How do you mix justice with mercy? That mixture is not an exact science, but prudence would teach that you certainly do not do that by treating an 11-year old like an adult.