Irony: Obama Called McCain To Thank Him For This Very Critical Vote 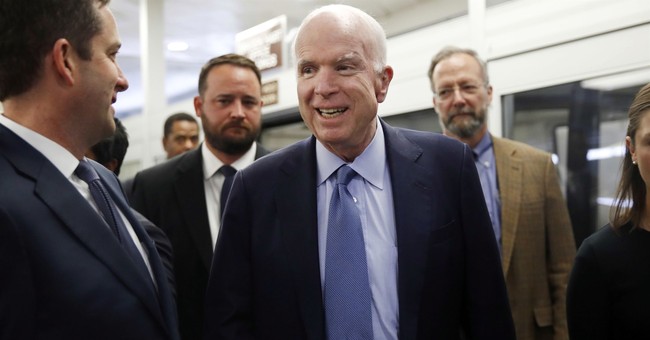 It was a vote that earned him the ire of Republicans—and rightfully so. Sen. John McCain voted with Democrats against the GOP’s so-called skinny repeal of Obamacare in July of 2017. Republican Sen. Lisa Murkowski (R-AK) and Susan Collins (R-ME) also voted against the bill, which killed it in the Senate. The infamous “thumbs down” vote sealed the deal. The Left rejoiced momentarily, with former President Obama calling McCain to thank him for his vote (via The Hill):

Former President Obama thanked Sen. John McCain (R-Ariz.) last year after he voted against the GOP effort to repeal ObamaCare, according to the senator's upcoming memoir.

“Among the people who called to thank me was President Obama,” McCain writes in "The Restless Wave," according to the Daily Beast.

“I appreciated his call, but, as I said, my purpose hadn’t been to preserve his signature accomplishment but to insist on a better alternative, and to give the Senate an opportunity to work together to find one,” he continued.

President Trump ripped McCain over this vote. Yet, in the end, the president was able to gut a huge provision of the bill later that year: the individual mandate. There was no working with Democrats on so-called meaningful reform. There was no way the Left would tolerate an overhaul of Obama’s signature domestic achievement, and the Republican base knew that their party working with Democrats wouldn’t ensure the repeal they’ve hoped for in the past election. In fact, for nearly a decade, repeal has been the mantra that’s driven conservatives to the polls. The GOP fell short that night in a stunning blow to the party and the Trump White House. This was a mess, which is why Trump needs to get the wall done before he exits the White House. First, it’s a signature campaign promise. Second, it’s a wall; there are no IRS tax codes, premiums, or other intricacies of health care markets that need to be looked into on this one. It’s rather straightforward. And if the GOP can’t help Trump build a simple wall to help curb illegal immigration, what good are you people?

Working with Democrats meant full repeal wouldn’t get done. Going at it alone would mean the moderate wing would balk, keeping it in place, and leaving Republican members of Congress open to anger from the base, maybe even primary challenges. What’s ironic is that McCain’s vote did save Obamacare. A man who ran against it in 2008, voted to save it in 2017.  No wonder why McCain is the Democratic Party’s favorite Republican.