The New Yorker: Kelly Presser Could Be Preview Of A Military Coup 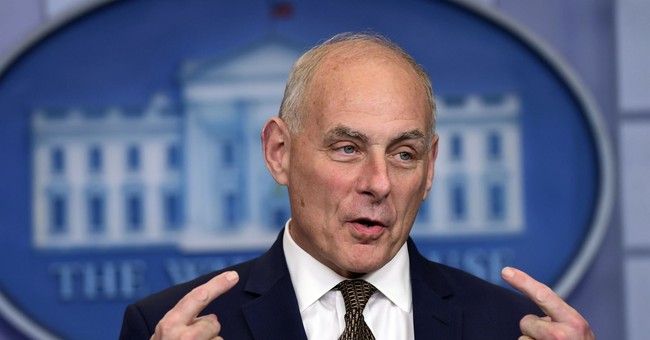 So there’s been a lot of hubbub over White House Chief of Staff John Kelly’s press conference, which sought to diffuse the tension created over President Trump’s call to Myeshia Johnson, husband of the late Army Special Forces Sgt. La David Johnson, this week. Sgt. Johnson was killed in an ambush in NIger earlier this month. The Left took umbrage at the notion that Trump said Sgt. Johnson knew "what he signed up for,” which is exactly what Barack Obama said about those who serve in law enforcement, but I digress.

The press briefing with John Kelly could serve as a preview of what a military coup in this country would look. https://t.co/9of5xn7ieL

Now have The New Yorker saying that the presser could serve as a preview for what a military coup would look like in America. I’m not joking. Besides the Left telling John F. Kelly, a retired Marine Corps general who lost his own son in combat, to go to hell—they think this media event somehow serves as insight into how a military takeover might look like, or something:

Argument 1. Those who criticize the President don’t know what they’re talking about because they haven’t served in the military. To demonstrate how little lay people know, Kelly provided a long, detailed explanation of what happens when a soldier is killed in battle: the body is wrapped in whatever is handy, flown by helicopter, then packed in ice, then flown again, then repacked, then flown, then embalmed and dressed in uniform with medals, and then flown home. Kelly provided a similar amount of detail about how family members are notified of the death, when, and by whom. He even recommended a film that dramatized the process of transporting the body of a real-life marine, Private First Class Chance Phelps. This was a Trumpian moment, from the phrasing—“a very, very good movie”—to the message. Kelly stressed that Phelps “was killed under my command, right next to me”; in other words, Kelly’s real-life experience was recreated for television, and that, he seemed to think, bolstered his authority.

2. The President did the right thing because he did exactly what his general told him to do. Kelly went on a rambling explication of speaking to the President not once but twice about how to make the call to Myeshia Johnson. After Kelly’s son was killed while serving in Afghanistan, the chief of staff recalled, his own best friend had consoled him by saying that his son “was doing exactly what he wanted to do when he was killed. He knew what he was getting into by joining that one per cent.” Trump apparently tried to replicate this message when he told Johnson that her husband, La David, had known what he was signing up for. The negative reaction to this comment, Kelly said, had “stunned” him.

3. Communication between the President and a military widow is no one’s business but theirs. A day earlier, the Washington Post had quoted a White House official saying, “The president’s conversations with the families of American heroes who have made the ultimate sacrifice are private.” The statement contained a classic Trumpian reversal: the President was claiming for himself the right to privacy that belonged to his interlocutor. But Myeshia Johnson had apparently voluntarily shared her conversation with her mother-in-law and Congresswoman Frederica Wilson by putting the President on speakerphone.

Now Kelly took it up a notch. Not only was he claiming that the President, communicating with a citizen in his official capacity, had a right to confidentiality—he was claiming that this right was “sacred.”

Citizens are ranked based on their proximity to dying for their country. Kelly’s last argument was his most striking. At the end of the briefing, he said that he would take questions only from those members of the press who had a personal connection to a fallen soldier, followed by those who knew a Gold Star family. Considering that, a few minutes earlier, Kelly had said most Americans didn’t even know anyone who knew anyone who belonged to the “one per cent,” he was now explicitly denying a majority of Americans—or the journalists representing them—the right to ask questions.

What in the fresh hell is this crap and is it satire? Yes, Taking Chance is a very good film starring Kevin Bacon. Everyone sees the process involved with the return of America’s fallen. Yes, not many know a family who has a member actively serving in the military. Yes, these men and their sacrifice should be commended because they fight so we don’t have to; it’s because of this that they deserve that respect for defending our nation. I know I’m preaching to the choir. I know this is all self-explanatory, but how thick do you have to be to think that there’s something problematic with giving special recognition, dignity, and reverence to those who serve and to those who have died. There is a disconnect here. I would be stunned to see how many Americans don't know we’re still at war in Afghanistan. It was a press conference. It was aimed to clear up a rather sensitive issue that the liberal media and their allies on the Hill tried to stir up. It was not a signal to launch Operation ECOMCON, or any other usurpatory action. Get a grip, people.

Gee, it's a real @*#&ing mystery why Gold Star father John Kelly thinks fallen soldiers are so admirable. He must be a crypto-fascist. pic.twitter.com/BIgPG65Orw