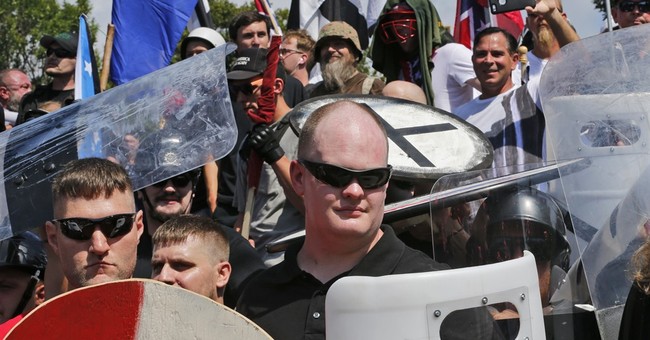 Gov. Terry McAuliffe, Charlottesville Mayor Michael Signer, and Police Chief Al Thomas held a press conference about today’s violence in the city that resulted in three fatalities. At the presser, Gov. McAuliffe was blunt and straightforward, telling the white nationalists and the Nazis who came to Charlottesville to go home and never come back. McAuliffe, still commenting on the white nationalist rally, said everyone else’s message is clear: we’re stronger than you. Take your hatred and your bigotry with you because there is no place for it here.

He added how they only made the Commonwealth of Virginia stronger. You will not success, and there is no place for you’re here in America. He reiterated how we’re a nation of immigrants, and that the white nationalist fringe won’t be allowed to destroy this mosaic tile that makes America great.

"You pretend that you are patriots but you are anything but a patriot," @GovernorVA says to white supremacists in #Charlottesville. pic.twitter.com/q6iTYuS2Su

Gov. McAuliffe to white supremacists: "Go home... Shame on you. You pretend you are patriots, but you are anything but a patriot" pic.twitter.com/RkJd142Kfc

In closing, McAuliffe said he spoke with President Trump, where he mentioned a need for a movement that brings people together. The governor commented on how the rhetoric has become so toxic and divisive, while calling for an end to the hate speech. We have to bring people together.

The mayor of Charlottesville, Signer, said this isn’t what the city is or stand for, and that they will overcome today’s tragic events. Police Chief Al Thomas said the violence that occurred today was not acceptable. He said city officials treated 35 people for injuries, 14 were the result of individual engagements, and the person killed in the car crash has been identified as the 32-year-old woman who was in the crosswalk. No injuries occurred as a result of confrontation with law enforcement. The crash is being considered a criminal homicide investigation.