Gingrich Says Firing Sessions Would Be A Mistake; Trump WH Mulls Recess Appointment For His Replacement 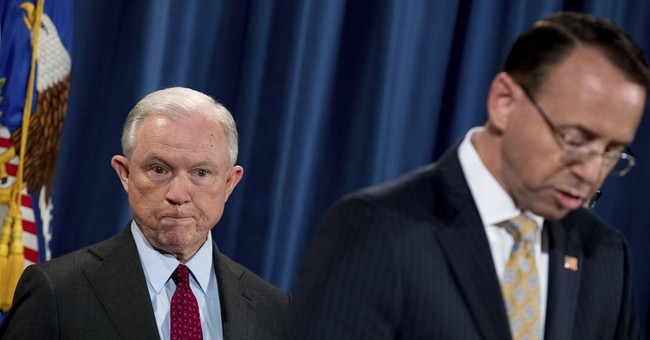 Monday night, during an interview with Fox News’ Martha McCallum, former House Speaker Newt Gingrich said that firing Attorney General Jeff Sessions would be a mistake. Given the totality of what he has done, what he plans to do, and the fact that he stayed with Donald Trump through thick and thin, Gingrich argued that loyalty is a “two-way street” (via Washington Examiner):

"There's a lot of good in Jeff Sessions," Gingrich said on Fox News. "I think it would be a big mistake for the president to do anything except move forward with him."

Gingrich, a former Republican lawmaker from Georgia who advised Trump during the campaign, said he would be "very surprised" if the president fired Sessions.

He cited Sessions' loyalty to Trump: Sessions was an early supporter in the campaign and the first GOP senator to endorse him.

"Sessions was the first senator to endorse Trump," Gingrich said. "Sessions stayed with Trump when he was 10 points behind during the whole taping of the conversation about sex and all that stuff. Jeff Sessions has been loyal all the way through."

"I would just point out loyalty is a two-way street," Gingrich said. "There's a point here where people have to say the guy was with you from the very beginning and he makes one big mistake? You really dump him? And if you do, what signal do you send to everybody else on the team?"

President Trump has made his disapproval of Sessions - job performance explicitly - known as of late, taking to social media to label him “beleaguered” and weak on investigating leaks and Hillary Clinton’s alleged crimes. Yet, Sessions’ recusal from the Russia investigation, which Trump feels led to the appointment of Robert Mueller as DOJ’s special counsel for the probe is what really irritated the president. Mueller now has access to Trump’s financials, including his tax returns, which has not sat well with the president. The latest revelation that Sessions discussed the 2016 election with Russian Ambassador Sergey Kislyak, which he denied during his confirmation hearing, has Congress demanding Sessions return to testify again. While Trump is reportedly mulling ways to fire Sessions, The Washington Post is reporting that this could lead to the president asking Sessions’ deputy, Rod Rosenstein, to fire Mueller, a move that could be politically disastrous. They also could install a new AG through a recess appointment:

President Trump and his advisers are privately discussing the possibility of replacing Attorney General Jeff Sessions, and some confidants are floating prospects who could take his place were he to resign or be fired, according to people familiar with the talks.

Trump could order Rosenstein — and then Associate Attorney General Rachel Brand — to fire Mueller. If they quit instead of doing so, he could appoint an acting attorney general who would. Trump could also appoint an acting attorney general with them in place — effectively passing over Rosenstein and Brand — and order that person to remove the special counsel.

Trump’s authority to jump Rosenstein and Brand, though, is murky. The Justice Department has issued opinions in the past saying that such a move is and isn’t permissible. And his pick for an acting attorney general would have to have Senate confirmation and be serving elsewhere in the government or have worked in the Justice Department for 90 days within the past 365 and be at a certain senior pay level.

Another scenario is that Trump could make a recess appointment, said Steve Vladeck, a professor at the University of Texas School of Law. Under that plan, Trump could choose an attorney general during the August recess who would serve until the end of the next Senate session, which would run to Jan. 3, 2019. That person would have the same authority as someone who is confirmed by the Senate, Vladeck said

Of course, Democrats are not going along with that, as noted by Sen. Chuck Schumer (D-NY).

Recommended
'The Privilege of Being a Democrat': Schumer Immediately Forgiven for Using 'Outdated and Offensive' Word
Leah Barkoukis

.@SenSchumer: If Trump tries to make recess appointment of AG to "fire special counsel Mueller...Democrats will never go along with" it. pic.twitter.com/Xq1dmpTJQY