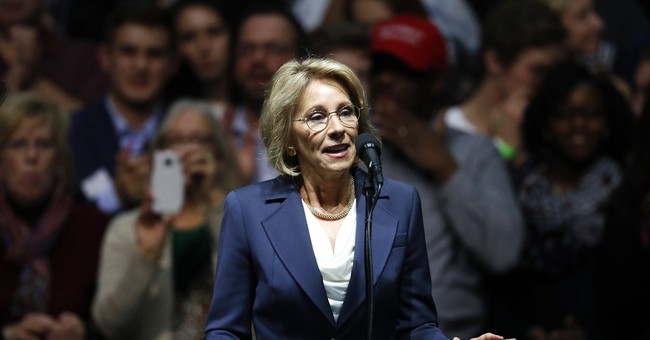 When Sens. Susan Collins (R-ME) and Lisa Murkowski (R-AK) decided to break from the GOP to oppose President Donald J. Trump’s nominee for education secretary, it threw a monkey wrench in the works. Thanks to former Sen. Harry Reid (D-NV), non-Supreme Court presidential nominees just need a simple majority to be confirmed. Democrats know this, which is why they have indulged in every procedural delay in the book. When it came time to vote, they boycotted—forcing the GOP to suspend the rules to push the nominations passed committee consideration.

Trump’s nominees for Health and Human Services, the Treasury Department, and the Environmental Protection Agency, Rep. Tom Price (R-GA), Steve Mnuchin, and Oklahoma Attorney General Scott Pruitt, respectively, all had to be pushed through by this method. DeVos, along with attorney general nominee Sen. Jeff Sessions (R-AL), were passed through party-line votes.

Yet, with two GOP defections, the vote on DeVos is now 50-50. It means that Vice President Mike Pence could make history by being the first VP to cast the deciding vote to save a presidential cabinet appointment. Sessions has been in limbo for weeks, but they need his vote to secure DeVos’ confirmation. That meant delaying a vote to confirm him, so the scheduled was yet again altered. The Hill reported earlier today that the vote was to be scheduled for next week, but Sen. Mitch McConnell wants to get a head start of the procedural aspect—the 30 hours of debate—so a final vote can be held late Monday or Tuesday:

Senate Republicans say they are getting fed up with Democratic obstruction and the extra early vote will allow them to get a head start in running time off the procedural clock.

McConnell is confident he will have the 51 votes he needs Friday to end debate on DeVos.

By voting at 6:30 a.m., Republicans have a chance of confirming DeVos by late Monday but if Democrats drag out the post-cloture debate for the full 30 hours, it could lag into Tuesday.