NC SEN: So, Is Hagan Ahead By One Or Two Points In New Poll? 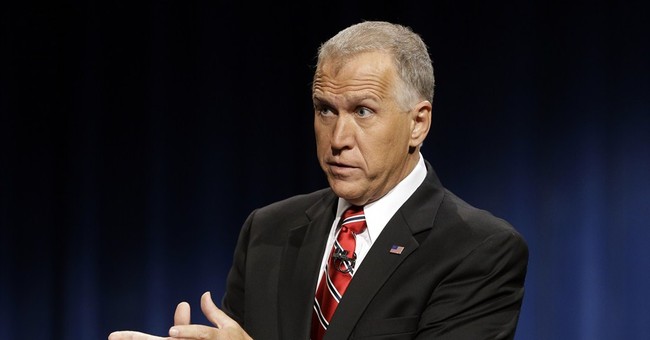 After the second senate debate in North Carolina, a new poll shows that the race is virtually a tie. A Suffolk/USA Today poll shows both Democratic Sen. Kay Hagan and her Republican challenger, Thom Tillis, tied at 45.4/45. With leaners, it’s 46.8/45.4. So, in all, Hagan is leading by 1 point in this race:

Incumbent Democratic U.S. Sen. Kay Hagan retains the 2 point lead over Republican challenger and North Carolina General Assembly Speaker Thom Tillis that she had when a similar poll was taken in August, according to a Suffolk University/USA TODAY poll of likely voters in the Nov. 4 general election. Hagan led Tillis 47 percent to 45 percent, including leaners, with 4 percent choosing Libertarian Sean Haugh and 3 percent undecided. Initially Hagan and Tillis were tied at 45 percent, but when undecided respondents were asked who they would vote for if they were standing in the voting booth today, more chose Hagan, giving her the lead, although still within the margin of error.

Hagan is ahead 52 percent-38 percent among women and leads in the Triangle, including the Raleigh-Durham area, 56 percent-36 percent. She also is strong among voters who said the most important issues are education (65 percent-23 percent) and health care (56 percent-34 percent). Tillis, on the other hand leads among men, 53 percent-38 percent; voters in the mountain west counties, 58 percent-33 percent; and among voters who said that the budget (64 percent-31 percent) and foreign policy (60 percent-29 percent) are the top issues facing Congress.

Wait, Hagan’s up 2 points? What gives? Well, that’s the beauty of decimals, as Harry Enten over at FiveThirtyEight explained on Twitter. Yes, Hagan may be ahead in the polls, but the margin is closer to 1 not 2.

I will be a stickler about this. 47-45 gives us belief Suffolk poll found a 2pt Hagan lead. It's closer to 1. (Not that she isn't ahead.)

Suffolk has basically a tie in NC Sen 45.4-45 Hagan-Tillis http://t.co/ERbgFmqKE7

Tillis had been trailing Hagan closer to four, but he seems to have begun closing that gap as we have entered the final weeks of the campaign, focused on foreign policy (ISIS), and reiterated his very humble upbringing to voters. Oh, and being able to totally concentrate on his campaign could be a factor as well; Tillis was in Raleigh for most of the summer given his role as the State House Speaker. If he fails to unseat Hagan in the general election come November, don’t be surprised if many an autopsy reads that he should have resigned his position in the legislature.

As for Hagan’s attack on Tillis’ reported cuts to education, she seemed to have contradicted herself in the debate (via Daily Caller):

He’s done tax cuts for the wealthy and he has gutted our education system,” Hagan claimed, “He has cut $500 million from the public education. And do you know what that means, folks? That means fewer teachers in the classroom, that means larger classroom sizes, and that means outdated textbooks, if there’s any textbooks at all.

Tillis responded by saying that Hagan’s claim had been proved false by fact-checkers. “Since 2011, we’re spending a billion more dollars a year in education. This year, we provided an average seven percent pay increase for teachers. … Next year, we’re going to give them another seven percent raise!”

After Tillis’ rebuttal, Hagan seemed to contradict her own previous statement. “We are now 48th in the nation on what we spend per pupil. So we might be spending more on education, but we have so many more thousand students, it’s being diluted.”

“Sen. Hagan’s statement attacking Tillis said he ‘has cut $500 million from public education.’ Literally, the statement is wrong,” PolitiFact wrote. “As North Carolina’s Speaker of the House, Tillis helped pass a budget in 2013 that increased actual spending on education in comparison to previous years.”

Yet, the biggest takeaway from the debate this week was Hagan’s admission that she skipped an Armed Services hearing to fundraise. This was surely going to make it’s way onto the airwaves in the form of attack ads–and they have arrived.

“While ISIS grew, Obama did nothing; Sen. Hagan did cocktails.” Ouch.

Also, Crossroads GPS released a TV spot of their own, slamming Hagan by using her own words against her when she ran against then-Republican Sen. Elizabeth Dole in 2008; she criticized Dole for voting with Bush 92 percent of the time. Hagan has voted with Obama 95 percent of the time.

On the social issues front, Women Speak Out PAC is spending $620,000 on this 11-day ad campaign calling Hagan “too extreme” on abortion.

On the left, Presente Action is hitting Hagan for helping to block relief for illegal aliens (via Huffington Post):

Presente Action has been critical of vulnerable Senate Democrats for urging President Barack Obama to delay executive action on immigration that potentially could shield millions from deportation. Although Obama initially promised to take action by the end of the summer, he pushed back his plans until after the election, reportedly at the urging of red state Democrats who feared it would hurt their chances.

Hagan is one of those vulnerable Democrats, along with Sens. Mary Landrieu of Louisiana, Mark Pryor of Arkansas and Jeanne Shaheen of New Hampshire. All four of them voted for a comprehensive immigration reform bill last year, but angered activists when they opposed executive action on deportations and joined Republicans last month to push for a vote to block Obama from making major immigration policy changes.

Latinos are sick of being treated as a political football by Democrats like Senator Kay Hagan and Republicans alike," Presente Action executive director Arturo Carmona said in a statement. "Our families matter, our lives matter, and this ad is meant to remind Senator Hagan of that. Much like Republicans have, Senator Hagan has worked to tear our families apart, and now we urge Latinos across the state to think twice before casting a ballot in her name."

The ads will air for one week in Charlotte, Greensboro and Winston-Salem. The ads say, in Spanish, that more than 1,000 Latino immigrants are deported each day and accuse Democrats of following in the footsteps of Republicans to become anti-immigrant.

"When there was a solution within reach, Senator Kay Hagan stood opposed," a voice says in the ad, as translated by Presente Action. "Senator Hagan voted with the most anti-immigrant senators in Congress in support of the continued deportations of our community."

Tillis will continue to take heat on education and possibly voter ID in the coming days since the Supreme Court blocked the 4th Circuit Court’s ruling that reinstated same-day voting registration and out-of-precinct voting (via News Observer):

The U.S. Supreme Court issued a ruling on Wednesday that means voters in North Carolina will not be able to vote out of their precincts on Nov. 4 nor register to vote and cast ballots on the same day.

The justices offered no insight into their 7-2 ruling to uphold a district court ruling to let the November election proceed under the 2013 rewrite of the state’s elections laws.

Critics of the law have stated that it disproportionately impacts minority communities; Hagan used the 4th Circuit’s ruling to take a swipe at Tillis, but North Carolina voters support measures that ensure the integrity of elections are maintained. As reported in the Washington Post when this bill was signed last year, “recent North Carolina polls and a Washington Post poll last year showed nearly three-quarters support requiring voters to show photo ID.”

The abortion ad is very well done and it seeks to mobilize the Republican base, but the gender gap will continue to hobble Tillis. Then again, Obama tends to dampen the mood with voters and Democrats are struggling to keep the voters they won from 2012.

While Tillis has been receiving better news in the past few weeks, there’s also this point:

Sorry for throwing some cold water on the enthusiasm, folks.