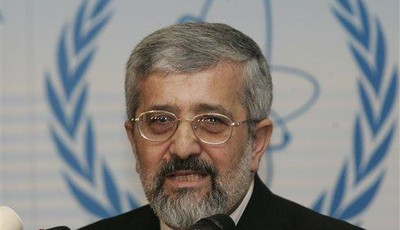 Warm fuzzies for a Monday morning:

Iran on Monday issued a bank note with a nuclear symbol in a move seen as an assertion of its national will in the face of international sanctions over its insistence on enriching uranium.

The new note for 50,000 rials _ worth about $5.40 _ also reflected rising inflation, a fact that has brought criticism of President Mahmoud Ahmadinejad's policies. It is worth more than twice the previously highest denomination note.

The note is printed in orange, green and blue and shows a nuclear symbol within a map of Iran. A brief text next to the symbol gives a quote from the Prophet Muhammad: "Men from the land of Persia will attain scientific knowledge even if it is as far as the Pleiades." Pleiades is a cluster of stars.

The Cleveland Indians Have a New Name and People Are Unimpressed
Spencer Brown
FBI Attempts to Do Damage Control After Initiating Whitmer Kidnapping Plot
Katie Pavlich
Politifact Busted For Totally False 'Fact Check' on Biden's Gun Grab
Katie Pavlich
Tucker Carlson's and Sean Hannity's Ratings Blew CNN Town Hall with Joe Biden Out of the Water
Julio Rosas
Liz Cheney Might Be Punished Again for Continued Support of Dems' January 6 Witch Hunt
Matt Vespa
'This Is What It Means to Be a Rock Star': How Eric Clapton Is Standing Up to Tyranny