Why a Paris Train Hero Is Jumping Into Politics 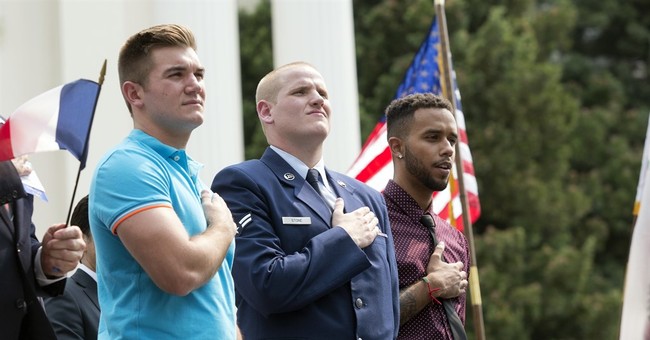 Alek Skarlatos is one of the three American heroes who thwarted a terror attack on a Paris train in August 2015. Since the day that changed his life, he's traveled the world, made the finals on "Dancing With the Stars," starred in a Clint Eastwood film, and received several accolades, including recognition from Presidents Obama and Trump and the French Legion of Honor Award from President François Hollande. Now, he wants to do even more to help his fellow man. Skarlatos announced this week that he's jumping into politics, starting with a run for commissioner in Douglas County, Oregon.

Using politics to help people is a “stretch,” Skarlatos admitted in a Fox News interview Friday. But he wants to help his community, which he says has been “ horribly mismanaged” by the federal government. He used the community's natural resources as an example. The timberlands, he said, are going to waste and in some cases even catching fire thanks to government neglect.

"We have to pay for the forest fires that they cause," Skarlatos explained. “It’s pretty sickening."

His platform will also focus on jobs and fixing the budget.

The government "wants to give us welfare and we don’t want it," he said. "We want to go back to work."

Skarlatos, a former Oregon National Guardsman, left the military in November. It's safe to say his training prepared him for his heroics in Paris. In August 2015, he and two of his friends, Anthony Sadler and Spencer Stone, were on a European trip. One day, they boarded the 13:15 to Paris and found themselves in the same car as a terrorist armed with an AR-15. The three friends, who all have military experience, immediately sprung to action and subdued the attacker, saving who knows how many lives. Clint Eastwood made a movie about it and made the bold choice to cast the real life heroes in it.

Skarlatos hopes the media attention will give him the upper hand in the race for local commissioner.

"I just want to help my community in any way possible."