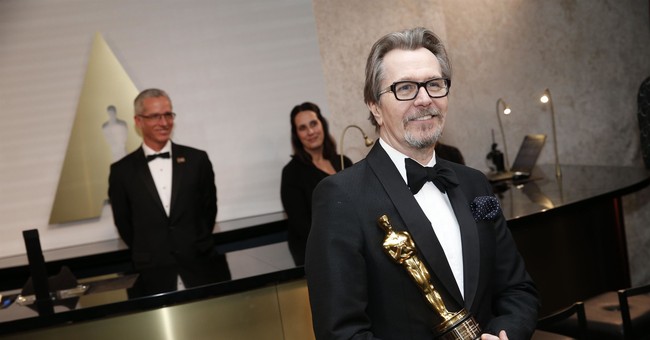 Gary Oldman is the newly tinted Best Actor after the Academy of Motion Picture Arts and Sciences awarded his stellar performance as former British Prime Minister Winston Churchill in The Darkest Hour. For the role, Oldman had to wear a body suit and a face mask, a process that each time took 3 hours, 45 minutes. He also studied hours of Churchill's speeches to nail his distinctive inflection.

The film covers the early part of Churchill's tenure as prime minister, when he faced an aggressive Nazi Germany. Instead of appeasing Adolf Hitler as some of his advisers urged him to do, he refused to surrender.

Oldman acknowledged Churchill's fortitude in his acceptance speech Sunday. Churchill, he beamed, was "marvelous company on what can be described as an incredible journey."

The recognition triggered a lot of folks.

Doesn't Oldman know that Churchill was a racist, a journalist for The Independent asked.

Yes, how dare he pay tribute to the man who stared down fascism when real heroes like [checks notes] the most successful people in Hollywood should have been praised. pic.twitter.com/d40gvW3ELj

The Independent is the same outlet that in January wanted to remind moviegoers about Churchill's "problematic past."

Other media outlets are following suit. In the wake of Oldman's win, ABC News published a report musing whether Churchill's legacy is soon to be upended by the more controversial parts of his past. For instance, was he responsible for the Bengal Famine of 1943? Did he hate Indians? Did he cheat on his wife? ABC suggests that until now, Churchill's steadfastness during such a crucial period in Britain's history has spared him from scrutiny into these other, more controversial aspects of his life.

Other social media users chimed in with the same take.

Well done to #garyoldman , a great actor but I haven’t and never will go to see a film that mythologises #Churchill as some hero when in fact he was a racist right wing imperialist , despised foreigners and working class and was actually tactically incompetent in WW2

Plenty of other people reminded the journalist that Churchill literally fought Nazis.

@ryanjohnbutcher Gary Oldman aknowledged a man who fought against actual Nazis! How dare Churchill for being more woke than you!

Oldman is probably unfazed by all the pushback, having a shiny new Oscar to display in his house.

In his speech, British actor Oldman also spent a few moments sharing how grateful he was to live and work in the United States.

"I've lived in America for the longest time, and I am deeply grateful to her for the loves and friendships I have made and - the many wonderful gifts it has given me," he said. "My home, my livelihood, my family, and now my Oscar."

Watch his whole speech below.