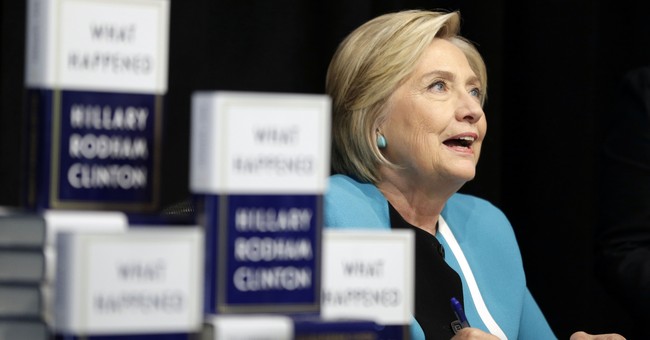 You may have noticed Hillary Clinton back on your TV screen lately. She's promoting her new book, What Happened, in which she offers her side of the story as to how she lost to Donald Trump in the 2016 presidential election. We've heard most of it before. She blames FBI Director James Comey for reopening her email investigation 11 days before the election. She blames Russian President Vladimir Putin for supposedly colluding with Trump associates to sink her campaign.

Yet, when she sat down with CNN's Andersoon Cooper, she offered a suggestion for future elections: Get rid of the electoral college.

"I think it needs to be eliminated," Clinton said of the Electoral College. "I'd like to see us move beyond it, yes."

She said the same thing in 2000, when Democrat Al Gore lost the general election to George W. Bush, despite garnering more popular votes. But, she is bringing it up again now that she has experienced the same disappointment. In last November's contest, Trump won 304 electoral college votes to Clinton's 227 votes. But, she much prefers talking about the popular vote, which she "won" by 3 million votes.

"It should be one person, one vote," she said, both reflecting on the loss and looking forward.

After Trump emerged the victor, other top Democrats like Sen. Barbara Boxer (D-CA) voiced support for abolishing the electoral college system. She introduced a bill a week after the election to end the "outdated, undemocratic system."

In their conversation, Clinton told Cooper that had she been in Trump's shoes and won and reports suggested that Russia had intervened on her behalf, she would have launched an outright investigation on day one.