Cornyn Takes Himself Out of Running for FBI Director 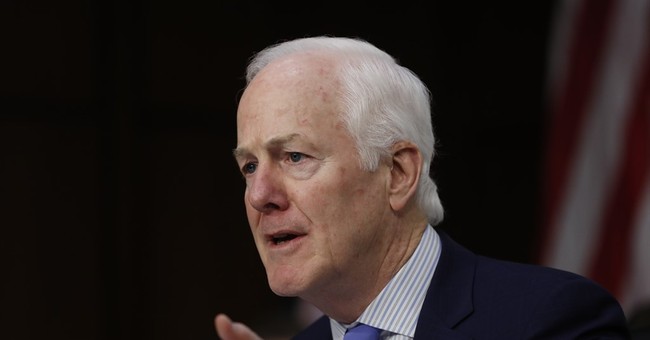 Sen. John Cornyn (R-TX) has taken himself out of the running to be the next FBI director. He released the following statement Tuesday, telling the administration he'd be happy to help them find an ideal replacement for James Comey, but for the time being he'd remain in the Senate.

New: Cornyn takes himself out of the running as FBI director pic.twitter.com/uVfeGXVUJT

With Cornyn out of consideration, Congress can rest a bit easier that the new FBI director will be a nonpartisan figure. Sen. Lindsey Graham (R-SC) acknowledged that Cornyn would normally be a wonderful choice, but these are "not normal circumstances" and Trump can't afford to make such a political appointment with Democrats accusing him of trying to stifle the Russia investigation.

President Trump fired James Comey earlier this month, claiming the controversial figure had lost the confidence of the agency. More than one senator has suggested that Merrick Garland, President Obama's rejected Supreme Court nominee, may be a prime candidate. He doesn't seem that interested, however.