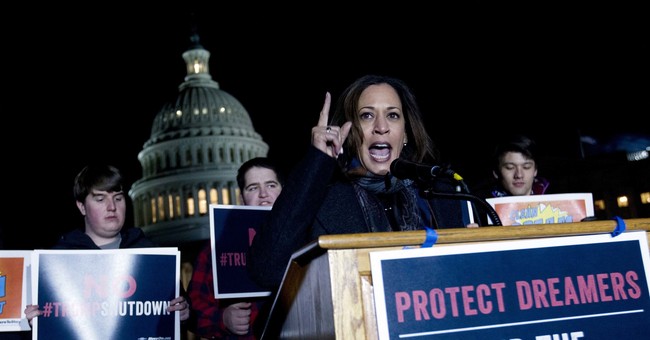 A former Obama speechwriter -- Jon Favreau, who President Obama once called his "mind reader" -- says it's "hilarious" to him that news media now refers to former Vice President Joe Biden's running mate, Sen. Kamala Harris (D-CA), as a "moderate" and a "centrist."

"She supports something extremely close to Medicare for all," Favreau noted, pointing out that self-described Democratic Socialist Sen. Bernie Sanders (D-VT) even acknowledged her support for the policy in his speech endorsing the Harris-Biden ticket.

"She is for the Green New Deal," Favreau continued, "She has one of the most liberal records in the U.S. Senate."

According to GovTrack, Harris does indeed have one the most liberal records in the U.S. Senate, even more liberal than fellow Sen. Bernie Sanders. And out of all the Democratic senators, Harris was the least likely to join bipartisan bills.

"If you want to call Kamala Harris's record in the Senate and her policies she is supporting now 'centrist' or 'moderate,' great," Favreau said. "If that's where the Overton window has moved, then congratulations to all the progressive activists because you have (expletive) moved the s--- out of that window, that supporting the Green New Deal and basically Medicare for all is now moderate and centrist, fantastic."

The media's attempt to soothe Americans' fears that Trojan horse candidate Joe Biden will be handing over the reins of government to far-left Kamala Harris and other extremists in his administration involves lying to the American people about her record. It's an insult to the intelligence of the American people, and even progressive shills like Favreau are calling the media out on it.

"She has one of the most liberal records in the U.S. Senate" pic.twitter.com/P24HFwWe44