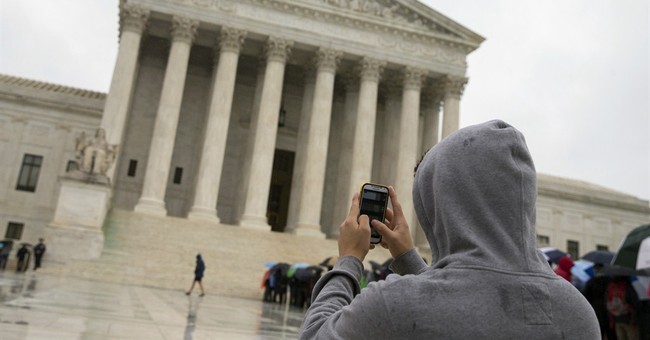 Police may not search the contents of an arrested citizen’s cellphone without a warrant, the Supreme Court unanimously ruled Wednesday in Riley v. California. The Court noted that the digital intrusion would not align with the Fourth Amendment, which protects individuals from “unreasonable searches and seizures.”

Cell phones differ both quantitatively and qualitatively than other objects which may be uncovered when physically searching a person, Chief Justice Roberts explained in the Opinion of the Court.

“Before cell phones, a search of a person was limited by physical realities and tended as a general matter to constitute only a narrow intrusion on privacy….

Most people cannot lug around every piece of mail they have received for the past several months, every picture they have taken, or every book or article they have read—nor would they have any reason to attempt to do so.”

There are few reasons to immediately disclose digital information, the Court acknowledged. The phone cannot cause harm to the officer or affect the arrested person’s escape.

“Law enforcement officers remain free to examine the physical aspects of a phone to ensure that it will not be used as a weapon—say, to determine whether there is a razor blade hidden between the phone and its case. Once an officer has secured a phone and eliminated any potential physical threats, however, data on the phone can endanger no one.”

Technology does not alter the right to privacy which Americans have fought for since the 1700s, Roberts stated, nor does it make the information any less valuable.

"Our answer to the question of what police must do before searching a cell phone seized incident to an arrest is accordingly simple— get a warrant."

While the Obama administration largely defended warrantless cellphone searches, Americans can celebrate the fact that the Supreme Court chose to show its allegiance to the U.S. Constitution.