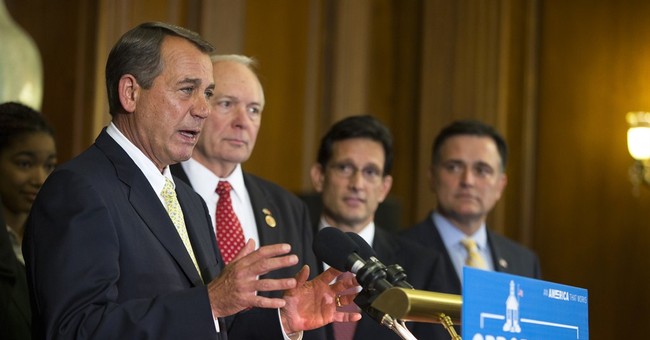 A new congressional delegation will bring a new vote for leadership. With Democrats needing a miracle to gain a few seats, much less actually take the House, Republicans are close to a sure bet to be in control come November. That'll mean elections, and elections means a John Boehner who needs to have the support of his caucus.

There are a lot of members of the GOP caucus who don't very much like John Boehner. He's taken a lot of heat for being insufficiently conservative. To avoid an embarrassing vote, leadership might have some "rules tweaks" in the pipeline, as National Journal reports:

House Republicans are quietly discussing a proposal that could fundamentally alter the way future speakers of the House are chosen, according to multiple GOP sources, with the objective of avoiding a repeat of John Boehner's embarrassing reelection vote in 2013.

The rule tweak began as an informal discussion but has morphed into a concrete proposal that is beginning to circulate in the House. According to people briefed on it, any Republican who votes on the House floor in January against the conference's nominee for House speaker—that is, the candidate chosen by a majority of the House GOP during its closed-door leadership elections in November—would be severely punished. Specifically, sources say, any dissenters would be stripped of all committee assignments for that Congress.

"There's a real concern that there's between 30 and 40 people that would vote against the speaker on the House floor, so they're trying to change the conference rules to make sure that doesn't happen," said a GOP member familiar with the proposal.

The last time, as National Journal notes, there were 12 members who voted against Boehner's speakership on the House floor. The GOP leadership wants to present a more united front this time around.