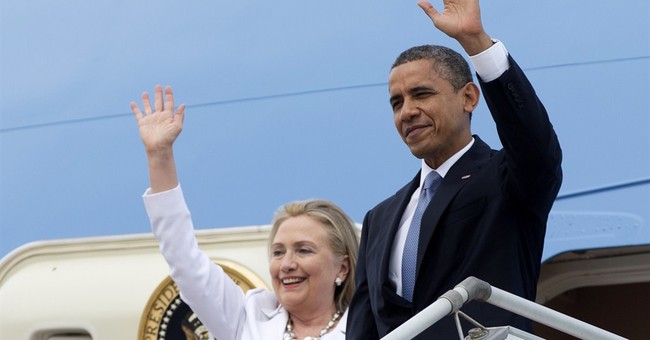 Hillary Clinton finally (and anticlimactically) "got it over with" yesterday afternoon, as a trusted uber-lobbyist announced her presidential campaign in a leaked email:

Hillary Clinton's announcement came in emails from John Podesta to donors and others http://t.co/nQJAmzEsen pic.twitter.com/K5gwMx3Iie


An inspiring roll-out. She joins the race as the prohibitive favorite to waltz into her party's nomination, and as the overall frontrunner, as well.  The former First Lady, US Senator and Secretary of State boasts a lengthy political resume, universal name recognition, the ability to raise "insane" amounts of money, and a powerful gender card -- to be played routinely, especially when times are tough.  Because she is likely to coast through the Democratic primary, such as it even exists, Hillary has the luxury of being able to message, strategize and fundraise like a general election candidate while Republicans lock horns and burn through cash over a long, bruising nominating contest.  Hillary Clinton will be formidable, and Republicans underestimate her real advantages at their peril.  That said, she's not an invincible force.  She's far less gifted politically than her husband, she has fewer reflexive sycophants in the media than the man who beat her in 2008, and she furnishes opponents with a host of targets for criticism.  Setting aside her wide array of baggage and lack of tangible accomplishments, she is currently embroiled in a pair of serious transparency/national security and foreign donation scandals, both of which raise questions about her judgment and priorities.  Saturday Night Live and The Onion telegraphed how satirists will skewer Hillary over the weekend, portraying her as maniacal, entitled, and power-hungry -- laden with contempt for the voters from whom she expects to receive her birthright.  Polling has fluctuated, alternately indicating that she'll be the heavy favorite, or eminently beatable.  She has a trustworthiness problem.  She has a polarization problem.  She has a raison d'être problem.  And she's working through her Obama problem:

For months, Mrs. Clinton and her team have pored over Mr. Obama’s poll ratings, policies and constituencies, seeking to solve a central riddle for the campaign she is about to begin: How can she run for president as her own person, without criticizing the sitting president she served — while her Republican opponents will be working to demonize them both? Aligning herself too closely with Mr. Obama is fraught with risk for Mrs. Clinton. Asked to imagine their “perfect candidate,” nearly six in 10 Americans said they wanted someone who would change most of Mr. Obama’s policies, according to a CNN poll released last month...Yet Mrs. Clinton and her team have decided that, on balance, the risk of lining up near Mr. Obama’s record is worth taking. Rather than run from Mr. Obama, she intends to turn to him as one of her campaign’s most important allies and advocates — second only, perhaps, to her husband, the other president whose record will hover over her bid. In a general election, Mr. Obama is expected to help Mrs. Clinton raise money, and he would be asked to campaign for her in, among other places, the most heavily African-American counties of the swing states that he won in 2008 and 2012, according to numerous people briefed on the plans, who discussed them on the condition of anonymity. Mr. Obama would most likely be scarce on the stump in places like Ohio and Pennsylvania, where Mrs. Clinton defeated him in the 2008 primaries by appealing to women and white working-class voters. But even in those states, Mrs. Clinton does not plan to distance herself from Mr. Obama’s record, advisers said.


So she'll more or less embrace Obama's domestic record, casting it as a good start on a job she intends to finish.  She'll lean on the sitting president for his prolific fundraising abilities, and she'll strategically deploy him to help fortify support and turnout among black voters.  How she'll approach Obama's disastrous foreign policy is a thornier dilemma, given her central role in shaping it as Secretary of State.  One move she'll almost certainly make is to position herself as ideally-situated to repair US-Israeli relations, a refrain that will assuage many Jewish Democratic donors and voters.  I'll leave you with Team Clinton's early maneuvers to work the refs, and the handiwork of some mysterious street artists who've posted anti-Hillary placards near her Brooklyn campaign headquarters:

Some of the anchors who attended Friday's off the record cocktail party with Clinton campaign staffers... pic.twitter.com/yybUuhpyvg


For those who don't get the reference, it's a callback to some pro-Hillary scolds preemptively attempting to limit the lexicon with which Mrs. Clinton may be acceptably described.  It's going to be a long, boring, frustrating, demagogic slog -- and it will begin, appropriately enough, with a cliched, contrived "listening tour."  Only 19 months to go, America. Actually, two more things: