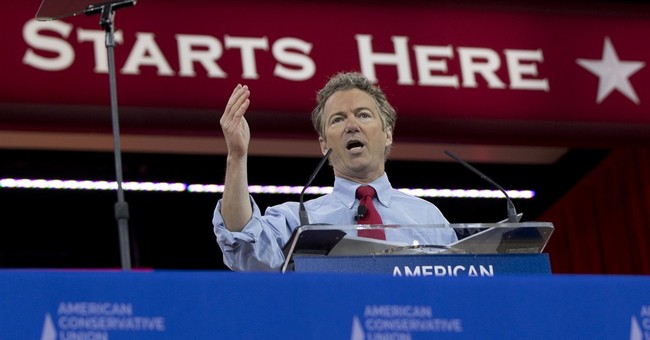 This is your campaign. Here's a link to our logo for graphic designers across the country to use>>> https://t.co/58EOcNC99n #rand2016

Ted Cruz was the first man in, raising millions and shooting up in the polls since his formal presidential announcement in late March. As of today, the hard-charging Texan will have some company, in the person of a fellow red state freshman Senator. Rand Paul appears poised to take the widely-anticipated and barely-disguised plunge later today:

It's time for a different kind of Republican to take on Washington. #rand2016 https://t.co/gQ3pss8FGC

The slickly produced video runs just under three minutes long and highlights his political rise over the last two years. It cuts together excerpts from his speech at the 2015 Conservative Political Action Conference along with television clips in which reporters, pundits and even comedian Jon Stewart offer flattering analysis of his rise. The video highlights, among other things, Paul's 13-hour filibuster of President Obama's nominee to lead the CIA in 2013 and his outreach to minority communities. A graphic declares him "a different kind of Republican." A full-screen graphic at the end of the video reads "On April 7, one leader will stand up to defeat the Washington machine and unleash the American dream." An audio track in the background features a crowd chanting "President Paul" underneath. Viewers are invited to "Join the movement." Paul is scheduled to hold a rally in Louisville, Kentucky, Tuesday where he is expected to announce his presidential bid.


Paul represents the libertarian wing of the Republican Party on domestic matters, and his non-interventionist bent on foreign policy is sure to spark fierce debate as the GOP primary unfolds. Paul's campaign will seek to consolidate the committed base of support that his father, Rep. Ron Paul, enjoyed during previous presidential bids, then expand his message to appeal to a broader audience. The video above makes clear that the Kentuckian will engage in active outreach to racial minorities and young people as part of a strategy to bring new voters into the Republican fold.  Paul enters the race with the endorsement of fellow Kentucky Senator Mitch McConnell, the upper chamber's majority leader:

Mitch McConnell, who four and a half years ago didn't think Rand Paul was fit to be Kentucky's junior senator, has endorsed Paul's widely expected 2016 presidential run, adding some early and important establishment heft to the coming campaign. "I don't think he's made a final decision on that," McConnell told the Lexington Herald-Leader. "But he'll be able to count on me." The early endorsement puts the incoming Senate majority leader, one of the two most powerful Republicans Washington, firmly on Team Rand—the kind of institutional support that Paul's father, Ron, never received in his two losing GOP presidential bids, in 2008 and 2012.


Like everyone else, Rand Paul enters the fray with a serious of real challenges to overcome. Perhaps chief among them are (a) offering a softer, less acerbic packaging of his father's politics without alienating hardcore Paulites, and (b) selling his national security and foreign affairs views to a Republican base that has rapidly rediscovered its hawkish roots. Paul currently commands a formidable base of support, pulling nine percent backing in Real Clear Politics'  GOP 2016 polling average. Obvious caveat: Such surveys are very early, and therefore very fluid.